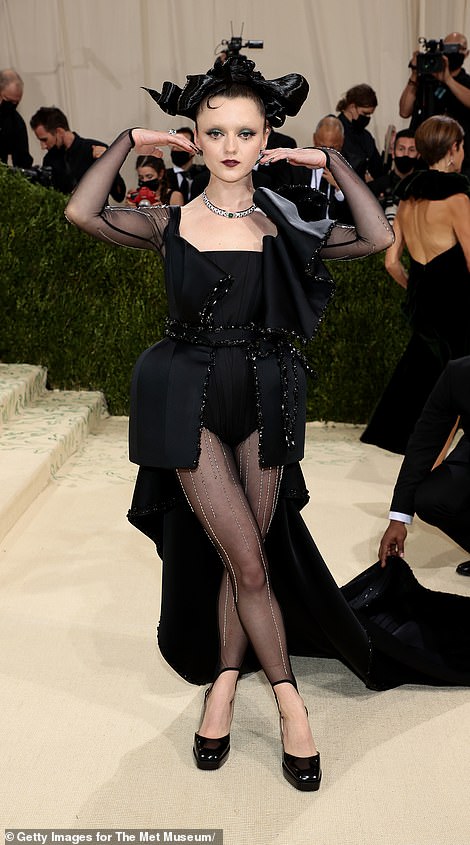 Sienna, 39, was a vision in a figure-hugging gold dress with a floral detail which she paired with a faux fur coat.

The actress let her platinum blonde locks fall loose down her shoulders while she also sported a pair of diamond earrings.

Emily, 38, cut an elegant figure in a silver sheer dress with a bejewelled embellishment and a tassel hemline.

The garment also featured a white shawl while the actress also donned an extravagant head piece and silver earrings.

Rose Leslie, 34, attended the star-studded event alongside her husband Kit Harington, also 34, and looked incredible in a lemon sleeveless gown. 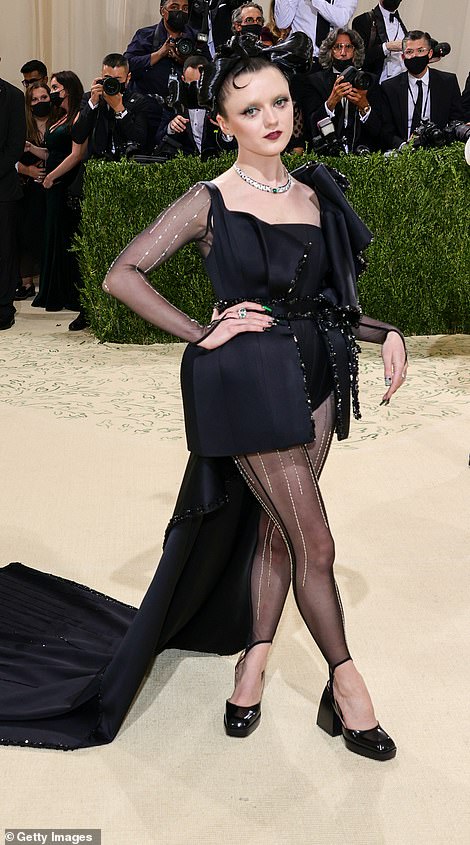 Outfit: Maisie Williams donned a black mini dress with a flowing train which she paired with sheer tights and matching sleeves 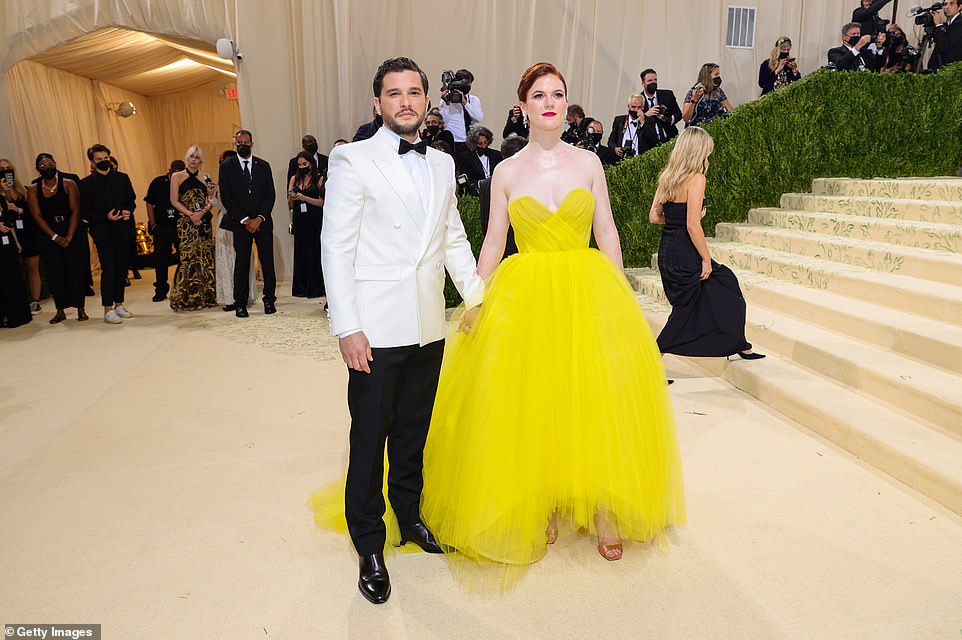 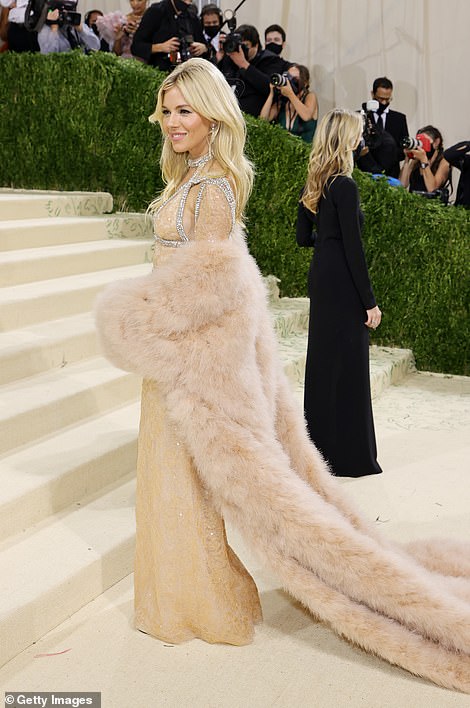 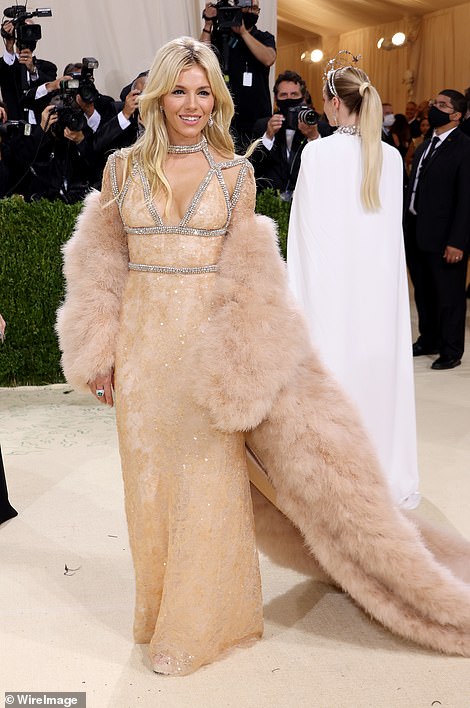 Bombshell: Sienna was a vision in a gold dress with a floral detail which she paired with a faux fur coat

Styling her tresses into an updo, she completed her look for the evening with a pair of bejewelled earrings.

Game of Thrones star Maisie Williams turned heads in a black mini dress with a flowing train which she paired with sheer tights and matching sleeves.

The actress, 24, added height to her frame with a pair of heels while she complimented her outfit with a black headband with a ribbon detail.

Cynthia Erivo was also in attendance at the Gala where she opted for a white crop top paired with a maching skirt with a long train.

The actress drew further attention to her look with an eye-catching silver necklace and matching earrings.

The son of David and Victoria Beckham cutting an incredibly debonair figure in a suave suit.

Meanwhile, the American actress oozed elegance in a dazzling pink gown that resembled that of a princess’.

Brooklyn proved just how much he dotes on his future bride-to-be, as he was captured lifting up Nicola’s dress to angle it for the camera whilst she worked the room.

Nicola really was pretty in pink as she completed her standout look with satin gloves and chunky boots that were visible when her fiancé kindly carried the bottom of the gown. 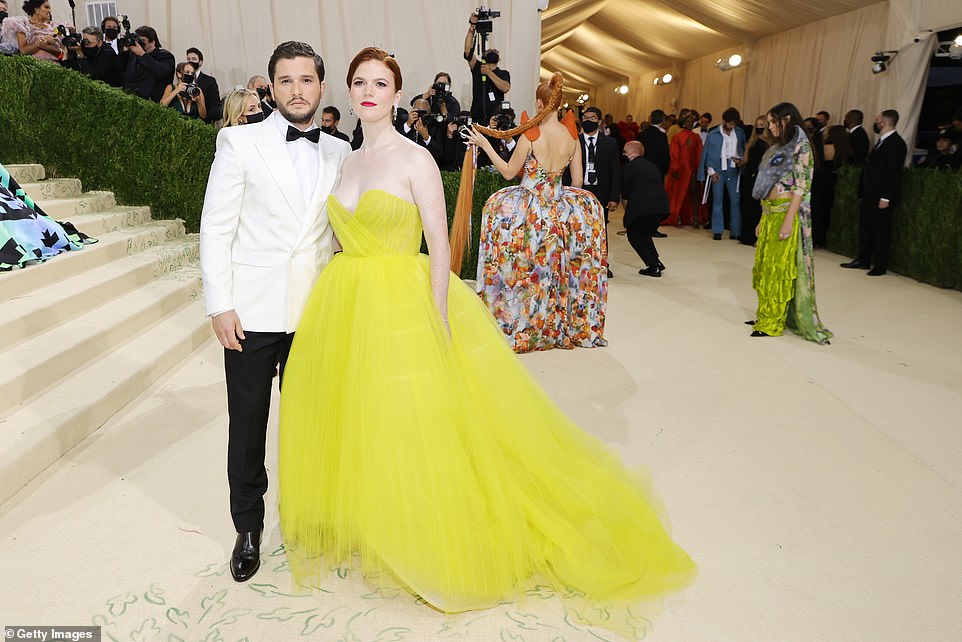 Not-so mellow: Rose was a vision of the beauty on the evening as she donned a canary yellow tulle gown by Oscar de la Renta that perfectly offset her porcelain complexion 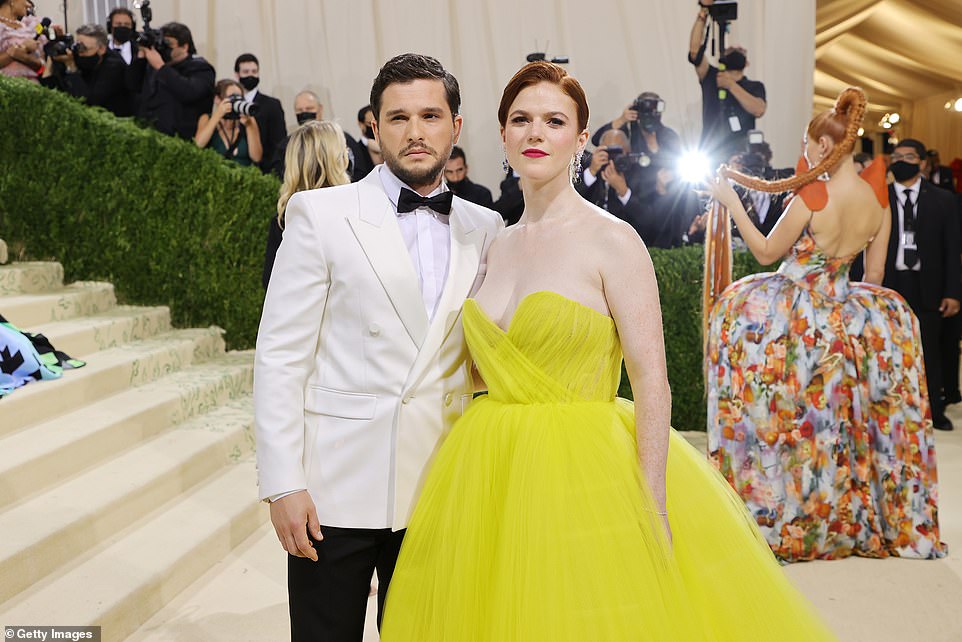 Striking: Adding yet more colour, the Scottish beauty donned a slick of scarlet lipstick on her plump pout, and styled her auburn locks in a chic chignon

Meanwhile, James Corden stood confidently in a black tuxedo by Gucci, which he paired with a white shirt and matching black waistcoat.

The actor posed alongside his gorgeous wife Julia Carey, 42, who wowed in a plunging sequinned gown by the Italian fashion house.

The chat show host stepped out in a pair of black patent leather Oxford shoes and sported a crew cut.

His wife looked stunning in the bedazzled number, which showcased a floral pattern alongside fringed beading details. 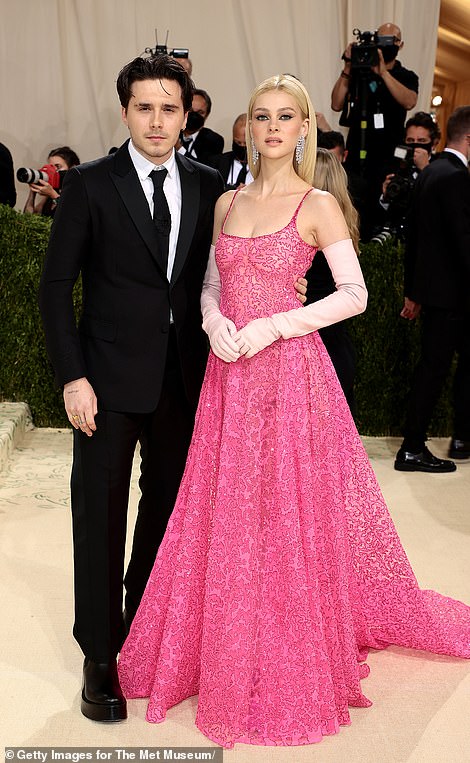 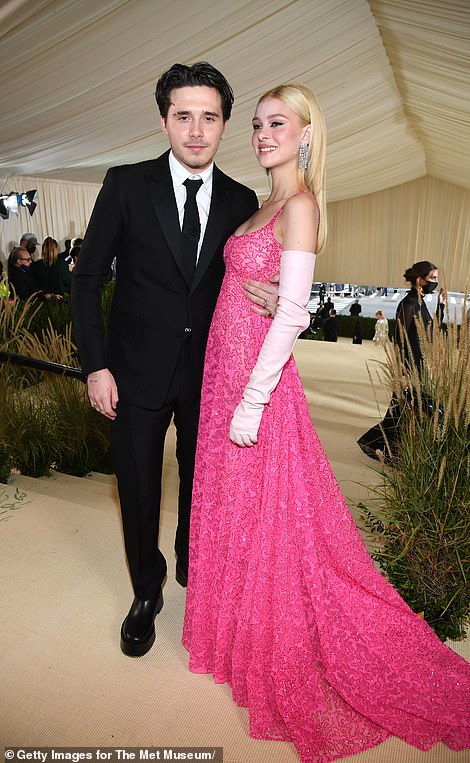 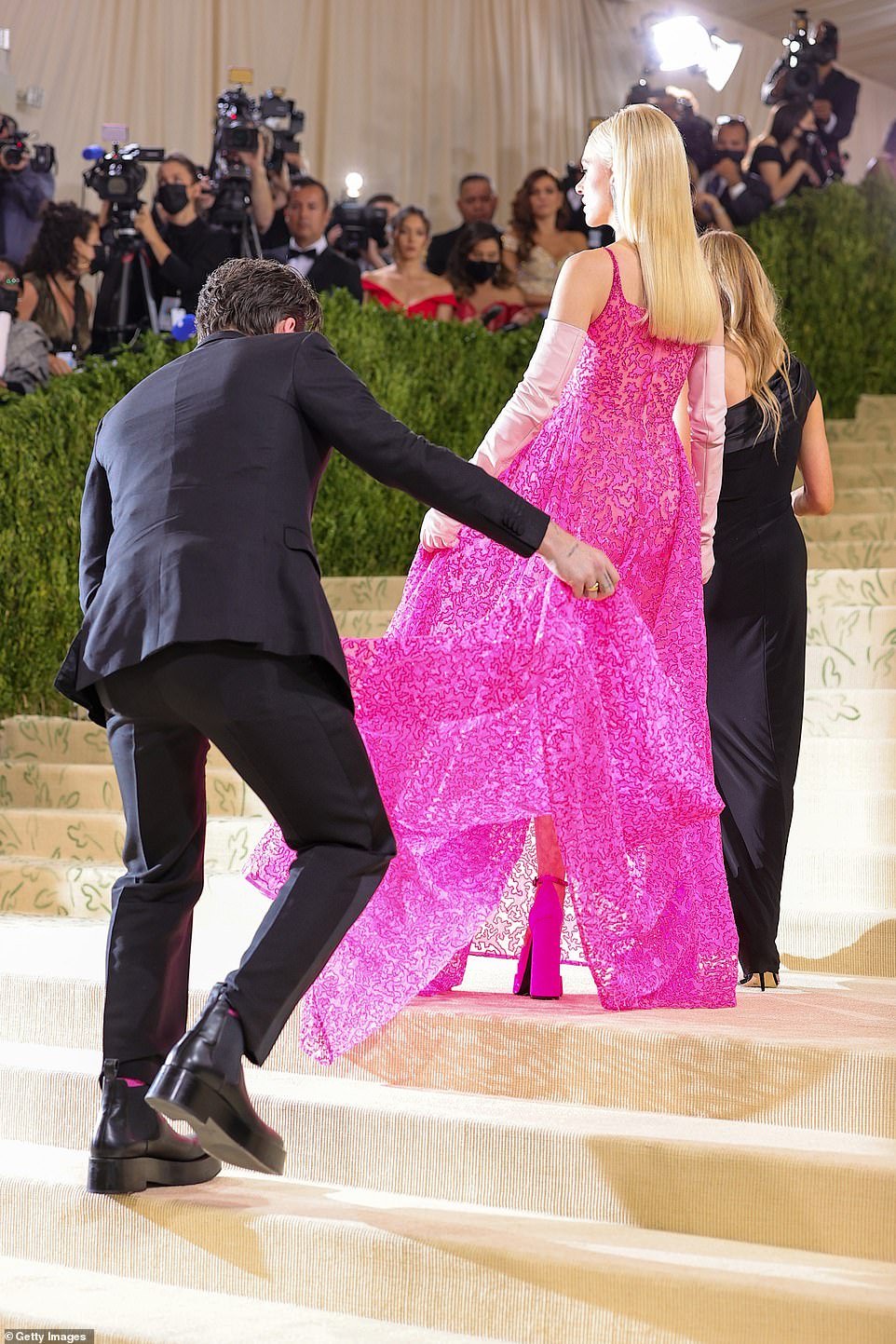 Smitten: Brooklyn was captured lifting up Nicola’s dress whilst she worked the room

The blonde beauty stepped out in a pair of silver heeled sandals, accessorising solely with diamond stud earrings.

Tom Daley cut a dapper figure for the evening in a black blazer which he wore with matching trousers and a shirt with a deep v-neckline.

The Met Gala is finally back after being cancelled in 2020 amid the pandemic. This year it was pushed to September from its traditional slot on the first Sunday in May.

The theme was In America: A Lexicon of Fashion and the event features a heavy-hitting contingent of celebrity co-chairs: actor Timothée Chalamet, musician Billie Eilish, poet Amanda Gorman and tennis star Naomi Osaka. 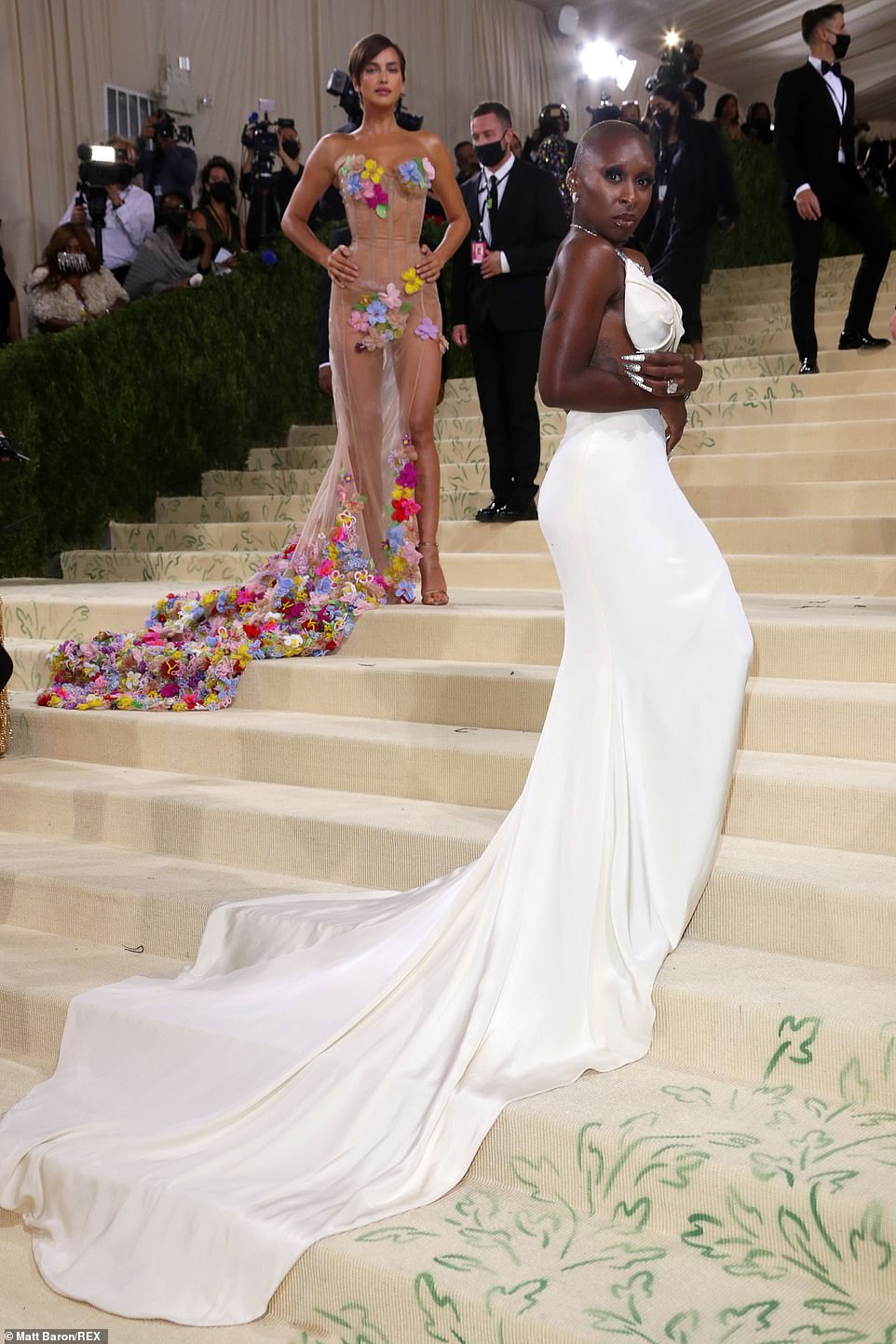 Flawless: Cynthia showed off her gown’s flowing train as she arrived at the event 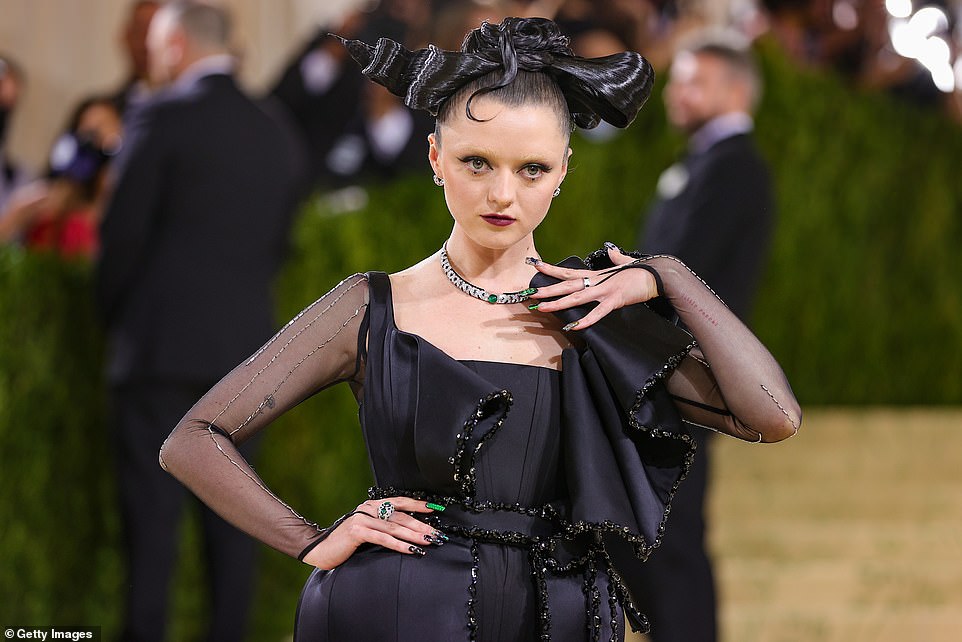 Eye-catching: Maisie complimented her outfit with a black headband with a ribbon detail 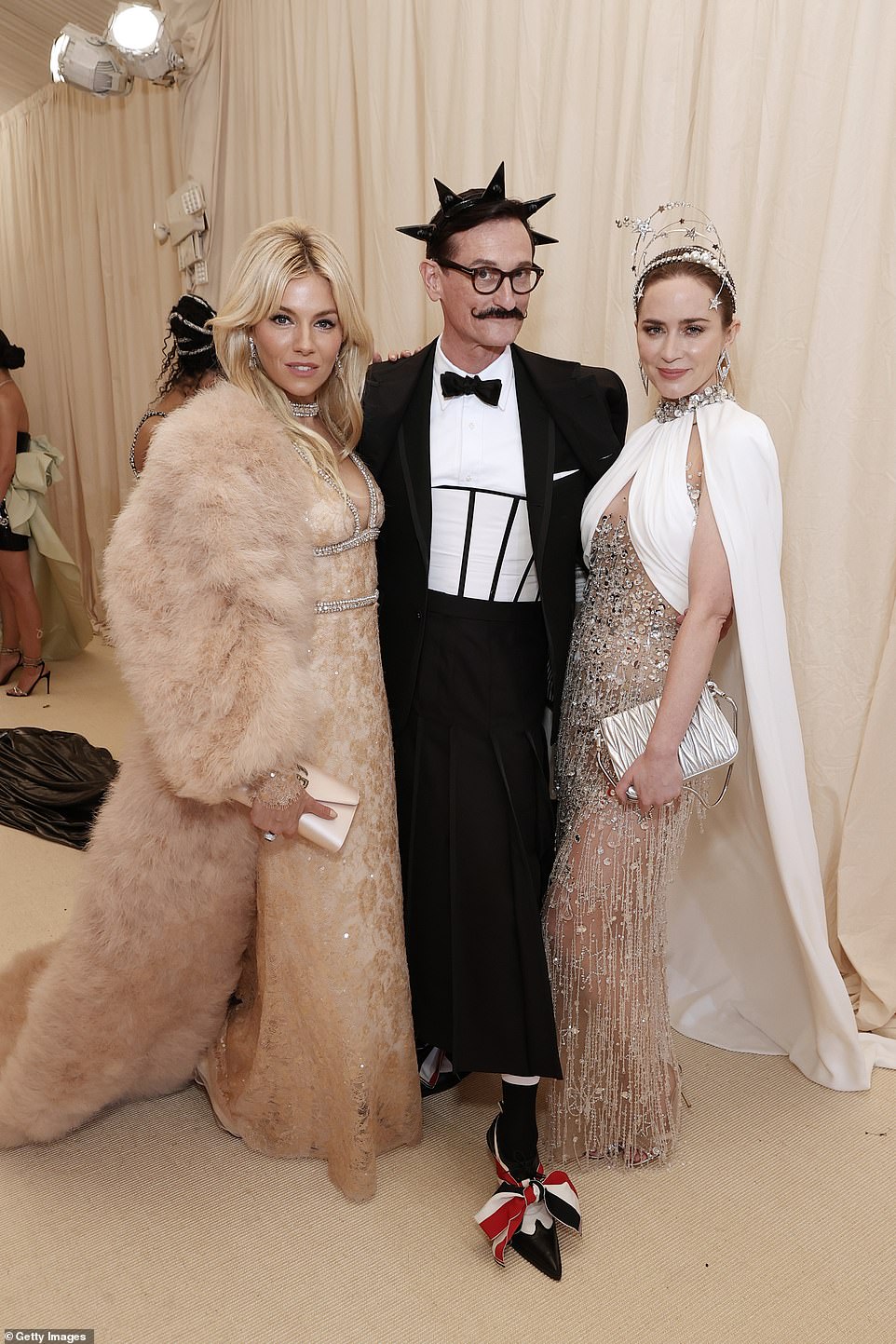 Trio: Sienna and Emily showcased their sense of style as they posed alongside Vogue’s European editor-at-large Hamish Bowles

At just 19, Billie made history as the youngest ever co-chair of the prestigious event.

When the hosts were first announced, Vogue magazine said: ‘Each of the Met’s four co-hosts embodies the defining factor of American style: individualism.

‘[They have each] developed a distinct visual language for their public personas, one that is informed by the legacy of iconic fashion made in the USA.’

‘Currently, all attendees at The Met Gala on September 13 must provide proof of full vaccination and will also be expected to wear masks indoors except when eating or drinking,’ a spokesperson for The Met said last month.

This year’s gala was a more intimate affair, to be followed by a larger one on May 2, 2022. Both will launch a two-part exhibition, a survey of American fashion to be on view for almost a year.

Looking good: Tom Daley cut a dapper figure for the evening in a black blazer which he wore with matching trousers and a shirt with a deep v-neckline

In America: A Lexicon of Fashion, opening September 18, will celerate the 75th anniversary of the museum´s Costume Institute and ‘explore a modern vocabulary of American fashion,’ the spokesperson added.

Part two, In America: An Anthology of Fashion, will open in the museum’s popular American Wing period rooms on May 5, 2022, and will explore American fashion, with collaborations with film directors, by ‘presenting narratives that relate to the complex and layered histories of those spaces.’ Both parts will close on Sept. 5, 2022.

Queen & Slim filmmaker Melina Matsoukas has been commissioned to create an open-ended film to project in the galleries, with content changing during the course of the exhibition. 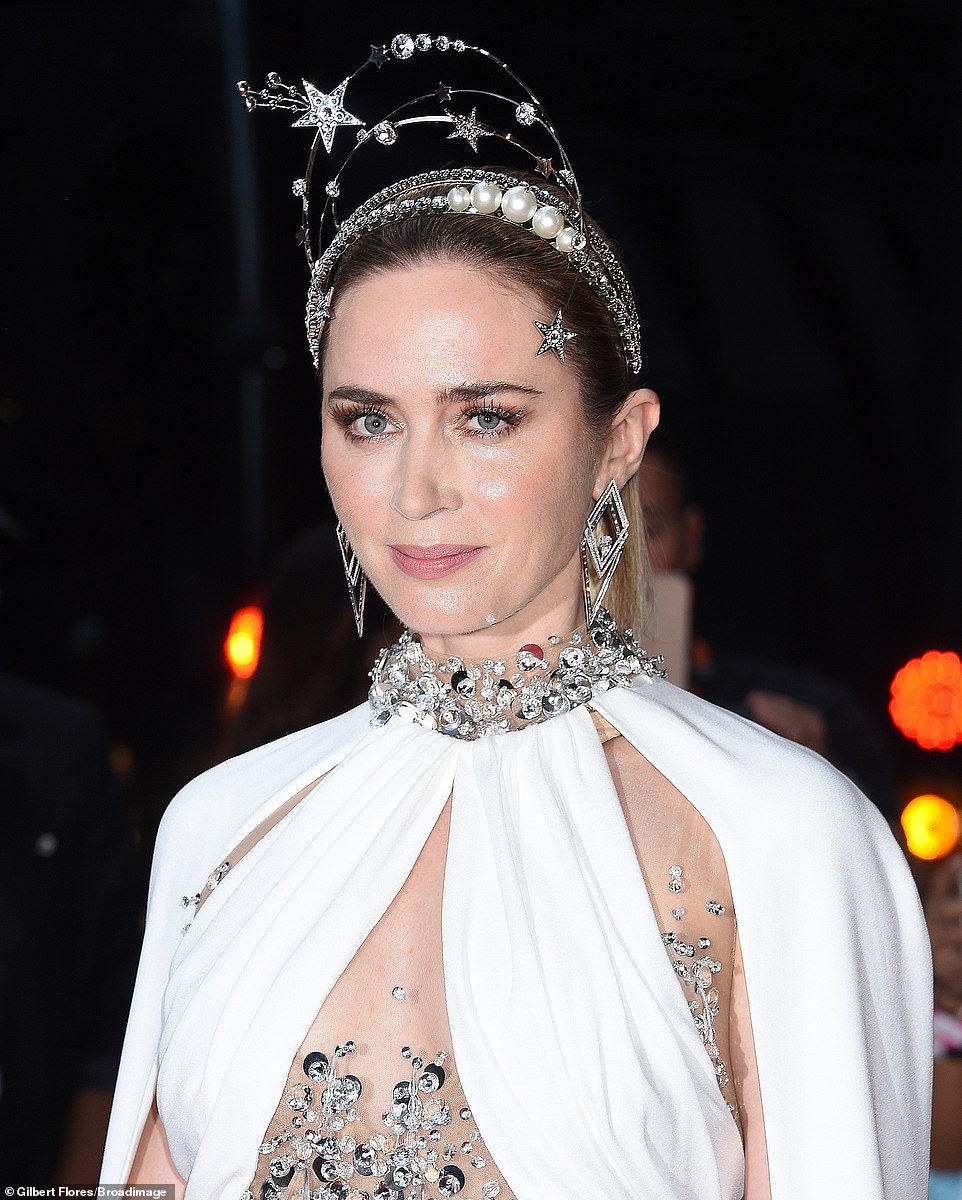 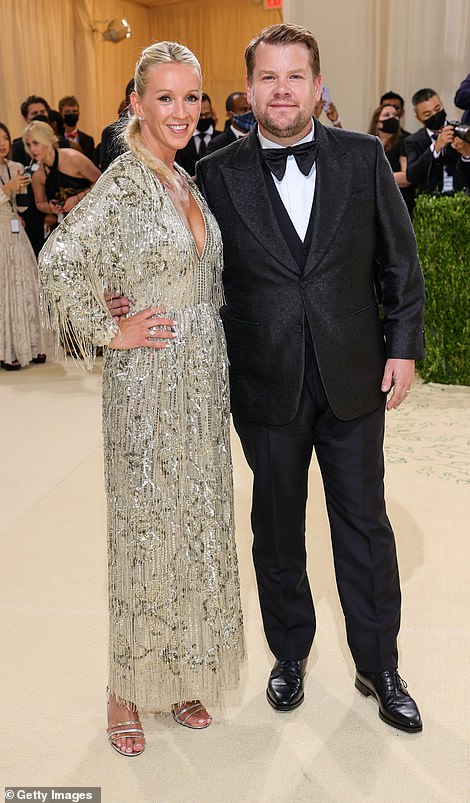 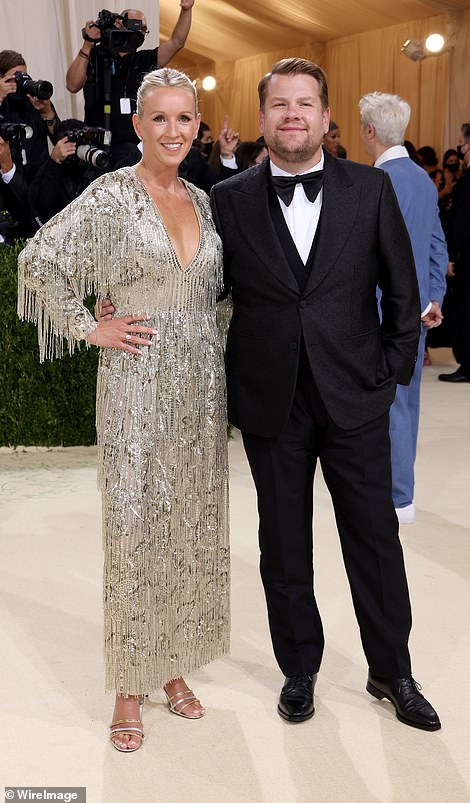 Dapper: James Corden, 43, looked undeniably dapper as he hit up the Gala alongside wife Julia Carey

The gala is a major fundraiser, providing the Costume Institute with its primary source of funding.

As always, the exhibits will be the work of star curator Andrew Bolton. Bolton has previously noted how challenging the past year had been for the fashion community.

‘It’s been incredibly inspiring to see how designers have responded to the ongoing challenges of the pandemic, how they’ve found new outlets to express their creativity and new ways to present their collections,’ he said.

Bolton added that many designers had been at the vanguard of the discussion about diversity and inclusion: ‘The social justice movements of last summer reinforced their commitment to these issues and also consolidated their leadership in advancing the conversation.’

In addition to Matsoukas, other confirmed collaborators from the film world include cinematographer Bradford Young, whose projects have included ‘Selma’ and ‘When They See Us;’ production designers Nathan Crowley and Shane Valentino; and Franklin Leonard, film executive and founder of The Black List, a listing of top unproduced screenplays. 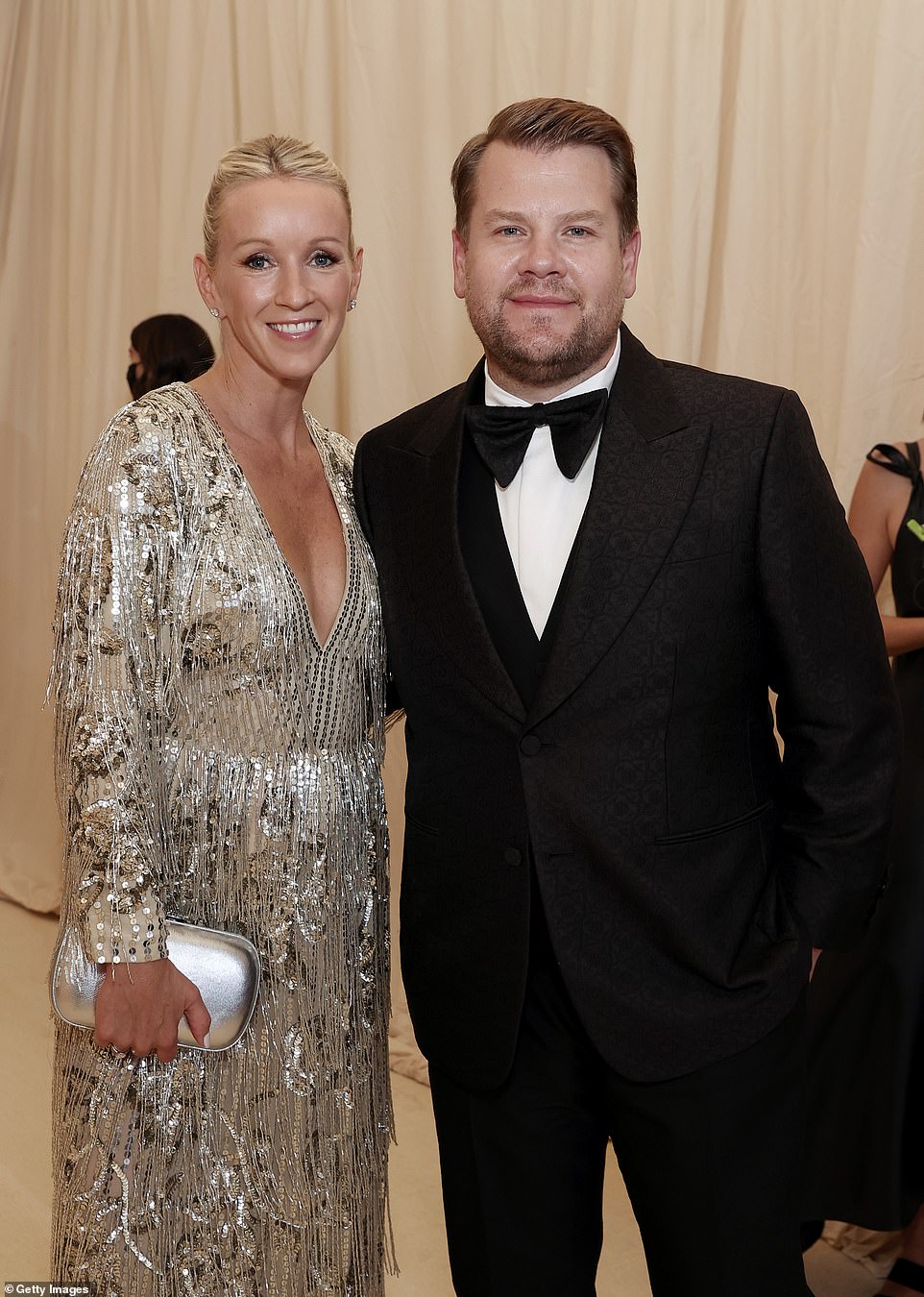 Welcome return: The Met Gala is finally back after being cancelled in 2020 due to the pandemic. This year it was pushed to September from its traditional slot in May