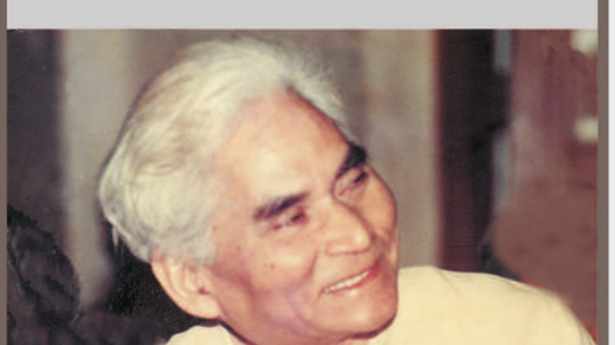 The younger son of Munshi Premchand, Amrit was an important writer, translator and biographer in his own right

It is a sad truth that the sprawling North Indian region that entertains delusions of replacing English with Hindi in every sphere of life often fails to appreciate, honour or cherish those who make lasting contributions to its literature, music, art and culture. It has hubris of power but not much love for Hindi or pride in the creative accomplishments of its own people who make the language richer.

How else does one explain the near-total indifference shown by the Hindi world towards as significant a writer as Amrit Rai whose centenary was on September 3? Although he was one of the leading lights of the All India Progressive Writers’ Association (AIPWA) and a prominent Left intellectual, no writers’ organisation cared to remember him and his very considerable and significant contribution. If literary quarterly Lamhi, edited by Vijay Rai, had not brought out its July-September 2021 special issue on him, the amnesia-afflicted Hindi literary world would not even have become aware of his centenary year. Amrit was the younger son of Munshi Premchand who even today remains internationally the best known Indian writer besides Rabindranath Tagore. Amrit was not daunted by the formidable reputation of his father and managed to emerge as an important fiction writer, translator, intellectual and biographer in his own right. Little wonder that Harishankar Parsai, satirist par excellence, paid tribute to his charming personality by calling him the ‘Raj Kapoor of Hindi literature’.

When Premchand died in 1936, Amrit was a mere lad of 15 years. Yet, he took over Hans, a literary journal founded by Premchand, as its editor and performed the job with great elan for at least 10 years from 1942 to 1952. This was a tumultuous period in the country’s history as it witnessed the Quit India movement, departure of the British and Partition, and communal violence and exchange of population on an unprecedented scale. Amrit brought out an Anti-Repression Special Issue of Hans that put the government’s policies in the dock, and wrote a long editorial listing the instances of repression. The Nehru government responded by banning the magazine in September 1949.

This was also the time when he started shaping up as a short story writer, a leading member of AIPWA, and a translator of great merit. He also had to cross swords with the likes of Marxist critic Ramvilas Sharma, known for his Stalinist literary methods and diktats, and Rahul Sankrityayana, the scholar extraordinaire.

While Rekha Awasthi, who has written a book on the progressive writers’ movement, tells us in her article in Lamhi that Amrit’s first collection of short stories titled Jeevan ke Pahalu (Aspects of Life) was published as early as in 1937 and was followed by Lal Dharti (Red Earth) and Toofanon ke Beech (In the Midst of Storms), Amrit himself says that his first book of short stories came out only in 1950. In his foreword to Lal Dharti, well-known Urdu fiction writer Kishan Chander wrote that Amrit’s short stories reflected the different aspects of contemporary reality very well. Yet, he had to face the hostility of Marxist critics like Ramvilas Sharma and Namwar Singh all through his life, making a balanced and realistic assessment of his creative output simply impossible in progressive circles. The right-wing literary camp for obvious reasons completely ignored him.

Undaunted, he went on to set new landmarks. Even today, Hindi is not very rich in terms of biographies of writers and one can imagine what the situation was like in 1957 when he took upon himself the most challenging task of writing his father’s biography. When Qalam ka Sipahi (Soldier of the Pen) came out in 1962, it was immediately recognised as a masterpiece. Only one other biography has so far been able to receive comparable acclaim and recognition — Sharat Chandra Chatterjee’s biography Awara Maseeha (The Tramp Messiah) written by Vishnu Prabhakar. Amrit Rai’s biography of his father was titled ‘Qalam ka Sipahi’ (Soldier of the Pen).

However, writing an objective and dispassionate biography of one’s father is a task unlike any other, and in this respect, Amrit’s biography of Premchand can be compared only with historian Sarvepalli Gopal’s biography of his father Sarvepalli Radhakrishnan, the philosopher who became the first Vice-President and the second President of independent India. Little wonder that it fetched him the prestigious Sahitya Akademi award the very next year. Here one cannot but mention yet another biography, titled Mila Tej se Tej ( Glow met with Glow), that Amrit’s wife Sudha Chauhan wrote of her mother and legendary Hindi poet Subhadra Kumari Chauhan.

Amrit did not only write fiction and critical essays — his oeuvre consists of at least half-a-dozen collections of short stories, novels and critical essays each — but also translated several literary works from English, Urdu and Bangla into Hindi. His translations of How the Steel was Tempered and Spartacus are considered to be benchmarks in this field. Carrying forward the Urdu-Hindi tradition of Premchand, he was very concerned about the way a crack had developed between the two languages. He dealt with this theme in his scholarly book A House Divided: The Origin and Development of Hindi / Hindavi, published by Oxford University Press in 1984.

Lamhi is the name of the village where Premchand was born. The journal Lamhi has become worthy of its name by presenting material of archival value on Amrit to celebrate his birth centenary.

The writer is a senior Hindi poet and journalist who writes on politics and culture.