MAUREEN LIPMAN: Why I will never go on holiday abroad again 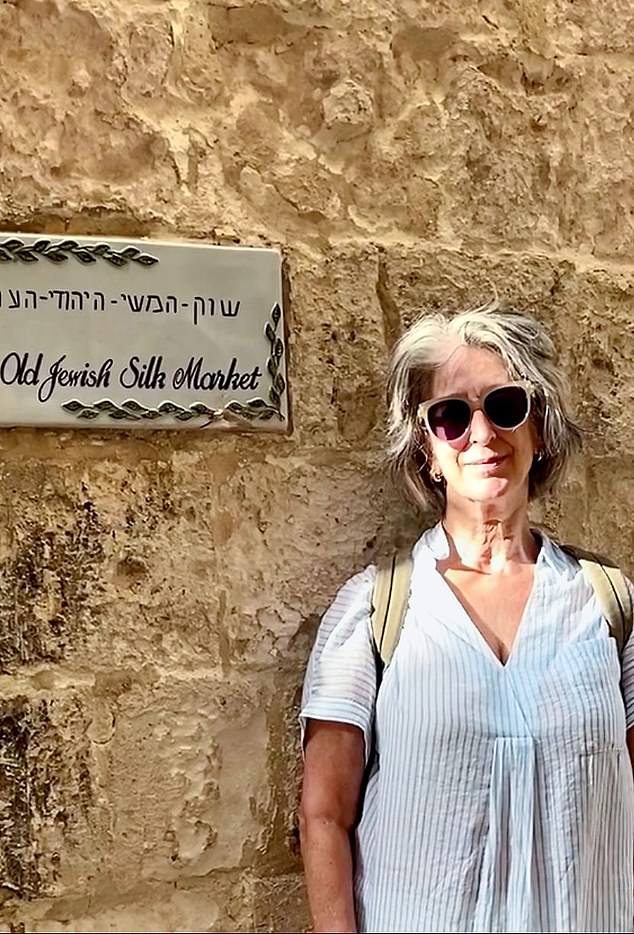 I’ve just returned from five days in glorious, historic, Green-lit Malta. No Amber gambling for me.

I ate well, met fascinating people, soaked up the sun in the company of the brother and sister-in-law I haven’t seen since pre-lockdown and felt my blood pressure plummet from 148 over 96 to 127 over 70 in the time it takes to down a Moscow Mule.

Yet, I’m here to tell you I will never go abroad again. Never. Neither will any sensible, sentient human being over 70. Not if they have to fly in to Heathrow, that is. It took years off my life.

I knew it would be hard fielding all the necessary documents, but thought I had it all covered with a folder as thick as an arm and full back-up on my iPhone.

I knew there was likely to be a problem because my passport says Lipman and my NHS bumf is in my married name, Rosenthal, but I was well prepared for that with a doctor’s letter, a gas bill, my marriage and birth certificates and, as an afterthought, a letter from The Central Chancery of The Orders of Knighthood.

Maureen Lipman: I’m here to tell you I will never go abroad again. Never. Neither will any sensible, sentient human being over 70

Two days before departure, I had had my expensive PCR test conducted by some shady characters in a corner shop which used to be a beauty spa five minutes ago, and booked a second test for two days after my return. I had instructions to have another PCR in any pharmacy in Malta to tide me over until my re-entrance to the UK.

Also required would be an all-important Locator Form (remember those words) to be filled in before, after, during and probably hereto after my five restful effing days abroad. To some extent, this worked and I got through check-in and customs here with a nod and a wink, a flash of my folder and a show-and-tell skim through my phone.

As I indicated, Malta was the very nicest and most interesting place to explore and the years fell off me. The problems began when no pharmacy in Malta actually did PCR tests, save at the airport and one distant pharmacy, Brown’s, in another town. Only by dint of a detour in my one-day guided tour was I able to get nasally swabbed by a jolly man in scrubs, flip-flops and Hawaiian shorts. The result, he said, would arrive on my phone within 24 hours.

I now had several Locator Forms and several Covid negative tests on the phone, confusingly interspaced between emails from my daughter, my agent, Rula Lenska, Gyles Brandreth and the assistant’s office of Coronation Street. 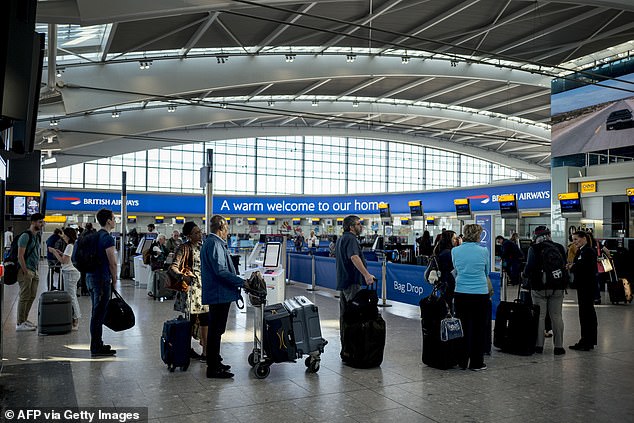 Pictured: Passengers queue to check in for their flights at Heathrow Terminal 5

‘Skimming through’ my Covid memorabilia on my phone was no longer an option.

So, after five fine days I headed, fatter and pinker, for Luqa airport and the check-in desk where the operator displayed a large black mask over her nose and her chin. I showed her my Locator Form and explained my passport and she said: ‘Cnnushwmne – hovifst – dwonanede?’

‘Er… I’m sorry, I didn’t catch that?’ I said, inclining an ear to her screen.

She sighed. She was too tired to look up. It was getting to the end of her shift.

I felt my throat clog up.

I fluttered my folder in front of her blank gaze, and something I once read in a Terence Rattigan play came into my brain: ‘She was as bored as the face of a fish.’

She shook her head and said the ‘Cnnushwmneh…’ thing all over again. I thrust my email contents at her through the plastic…

She waved a dismissive hand for me to step aside. I felt something snap. I sang out in a wobbly tone unlike my real voice. ‘I’M DOING MY BEST!’

Her mask stared at mine…

‘I’M 75 AND my ankles are swollen like two puff adders and… I DON’T KNOW WHAT YOU WANT FROM ME!’

Well, in time, a ridiculously kind person on Information helped me find the form and I managed to make it through the undressing, dressing and metal-detecting bits and on to the plane and a nice quiet read of the London Review Of Books from July, but as we began descending I started to panic about immigration and the next Locator Form which was now demanding a reference number for the Covid test I’d had in Valletta.

I couldn’t manage to up – or is it down – load it from one email on to another. Both the stewardess, bless her, and the kind lady in the next but one seat tried to help me do it and still it failed.

I found myself the last person on the plane. I started walking, my knapsack on my back, Happy Wanderer-style, with the Duty Free bags clinking and biting into my wrist.

I walked to the walking escalator, which propelled me along, then to the tarmac which didn’t and thence to the next escalator which was static, which threw me off balance and made me walk like an extra in Michael Jackson’s Thriller video. By the time I reached Arrivals, I was a bit short of breath and even more so when I saw the upward escalator was jammed, with at least 50 people stuck on it and the immigration hall at the top was looking like the third day of Glastonbury.

I mean, Welcome to Terminal 5, Gateway to Babel. By Pieter Bruegel.

Thousands of tired souls with prams and scooters and squalling babes and elderly, limping codgers – one of whom was me – shuffling and snaking around meaningless ropes to beg or barter their way into this sceptred isle.

My throat clogged up again. My eyes began to prickle… yes, I was about to ‘go off on one’. I had no conception of whether my panic was real or whether I am actually the best actress there has ever been. By the time I reached my barrier, I was hyper-ventilating and my knees were bending like Clive Dunn’s in Dad’s Army.

‘Here’s my p… passport but I can’t… ’ I gasped to the raised eyebrows of the official…’ I need to… can I sit…?’ I whispered throwing myself on to a Sikh official standing nearby… ‘I am… It’s my mask… it’s… I can’t catch my br…’

Bless his heart, he ushered me straight through, Locator Form notwithstanding – and indeed, by now, I wasn’t standing, just bobbing and weaving like a plastic duck in an amusement arcade.

A stool was fetched. Paramedics were mentioned and a smallish crowd gathered around to suck in my air.

The upshot was that I recovered, with a can of water and some Security TLC, and waddled off to Baggage Reclaim which resembled the scene of a crime in a Scorsese film and thence, because I couldn’t locate the Heathrow Express and frankly didn’t want to… to the desperate and endless queue for an £80 taxi.

I left my hotel in Malta, where they are one hour ahead, at 3.30pm and got home by midnight. I would go back tomorrow but only if I could go by pony and trap.

Otherwise it’s a no-brainer. I will never leave England again.

Exit poll numbers would be worst showing ever for CDU