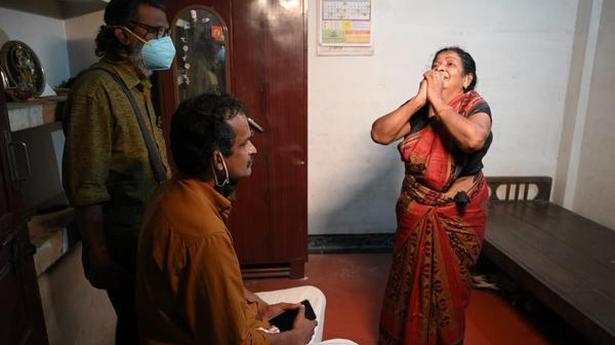 Drama has been the only source of income for 51-year-old Bhanumathy A. The Thrissur-based theatre practitioner has been part of several drama troupes across Kerala for the past 27 years before the pandemic completely upended her life as stage performances came to a standstill. Then Rangachetana, a theatre collective of Thrissur stepped in to help.

Bhanumathy recently performed a solo play in her rented one-room accommodation, which became a ‘stage’. Her performance in front of a solo audience comprising Varghese, an autorickshaw driver who she hires frequently was not only streamed live via Rangachetana’s Facebook page but she was also ‘paid’ a remuneration of ₹ 10,000 for the performance. Four members of Rangachetana were at hand to help her.

“The money I received has been of great help. The last year and a half have been hard. I had not paid my monthly rent of ₹3000 for five months,” says Bhanumathy who lives alone. She used the remaining ₹1000 to buy ration and apply for her Aadhar card which she had lost in the floods of 2018.

Comparing the aid to “water that had doused a raging fire,” she says, “I was not acting, I was living the role of a person left alone and without money, by Coronavirus. I felt relieved.” She scripted the play.

The monetary aid Bhanumathy received is part of Rangachetana’s project to help artists struggling due to COVID-19. Started on August 5, they have so far helped 15 artists. Each artist has been paid ₹10,000.

“It has been difficult for theatre practitioners to survive, especially those for whom this is their sole source of sustenance. We organised ‘Veedu Arangu’ (loosely translated to mean stage at home) , to coincide with World Theatre Day (2020) where we went to houses to put up plays. But that is not sustainable in a situation like the one we are in at present,” says ET Verghese, president of Rangachetana.

K V Ganesh, artistic director of the organisation, who mooted the idea is sensitive to the fact that aid should be “paid for work” rather than charity. “Who would like to feel that they are being given handouts or paid money out of charity? This was a sensitive way of doing it while making the artists feel proud of their work,” he says. The project aims to include, along with theatre practitioners, melam artists (instrumentalists who play at temple festivals) and ganamela (music shows) singers.

The initial amount, for equipment and other expenses, was collected from contributions from members, friends and well-wishers of Rangachetana. The performances, mostly solo, are recorded and streamed live. “We request those watching to make a small donation; even ₹10 would make a difference. So far 6000-odd people have seen the performances, but only 194 have made a donation,” says Ganesh. They have collected ₹2, 14, 830.75 so far, and the bank account details are shared. There have been people generous enough to contribute repeatedly. Yes, somebody even donated 75 paise, which we happily accept,” says Ganesh. All performances are in keeping with COVID-19 protocols.

The collective has a list of artists in need and they are approached only when the money has been mustered. “That is better than giving false hope,” he says. The actors put up the play at their homes, using props and costumes available; they are requested to keep the duration at 20-30 minutes but sometimes it extends to an hour. “We don’t insist on the time… for the artist, it is a performance. They should be able to accept the ‘payment’ with pride,” Ganesh says. One guest, chosen by the actor, watches the play and hands over the amount.

“Actually we paid only 14 artists. Stage and film actor Hareesh Peradi, who also performed, paid us. He expressed a desire to chip in by putting up a performance, which we gladly accepted. It was at his house in Kochi. At the end of performance he contributed ₹ 10,000 to the corpus. He is an established actor in films, he did not have to. Likewise, Santhosh Keezhattoor, who also took out the time to watch a performance. Film actors with a background in theatre have been extremely supportive,” Ganesh adds. The performances included pulikali. The plays have been stopped temporarily due to the rising COVID-19 figures, but will be resumed once it is safe.

NG Unnikrishnan from Mala, near Thrissur, has been an actor for the past 50 years and his wife for 40 years. The performance at his house was a six-people show, including his wife, her sister and children. His son directed it, “Besides the financial help, it was also an opportunity to perform after a long time,” he says.

Although the performances are now in Thrissur district, the plan is to move to other places with the support of local drama troupes/companies. The aim is to provide succour to at least 100 artists and their families. An option was to space out the performances over the course of a few months, “That was not possible as the condition of many is dire. They are in desperate need, ₹10,000 would go a long way for them,” says Ganesh.

Using Bhanumathy’s water analogy, he adds, “These are just drops of water on parched land!”