Josh Little, spinners combine to fold Zimbabwe up for 131 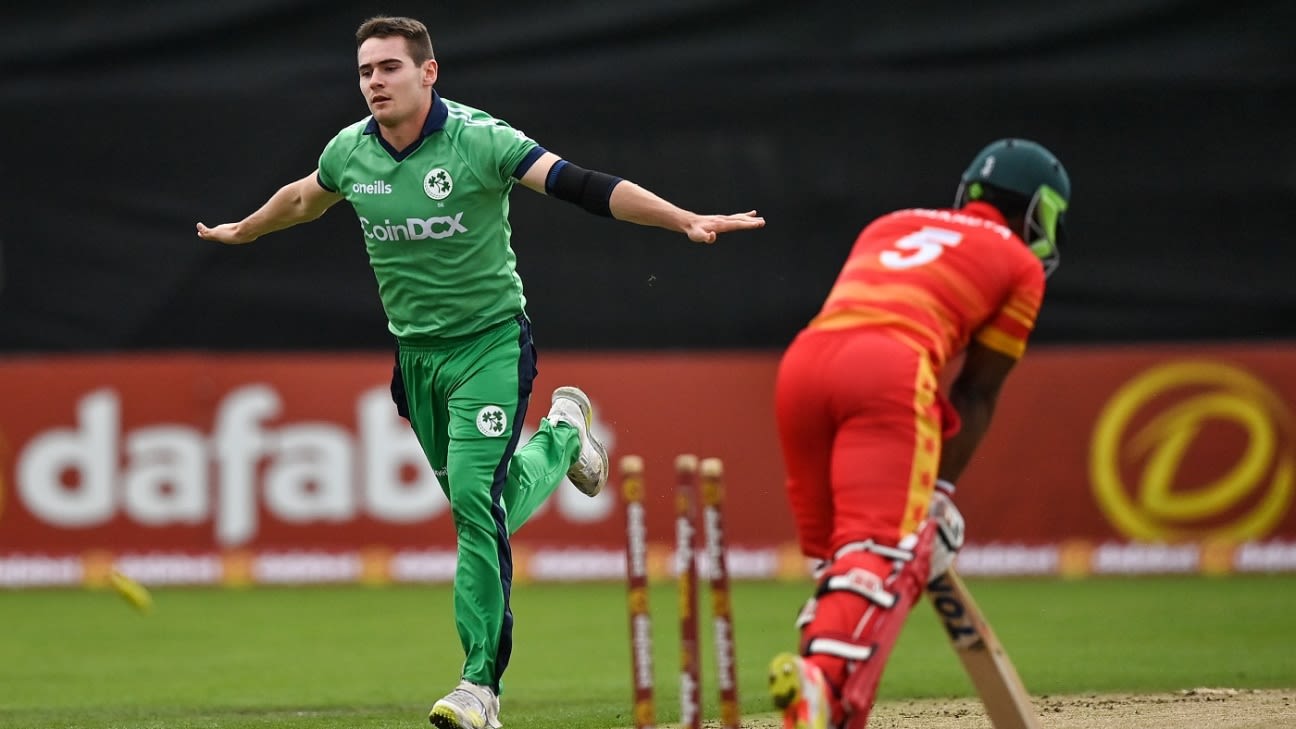 Zimbabwe stuttered through a rain-affected innings, and stumbled against both seam and spin to leave their bowlers 131 runs to defend to close out the series against Ireland. Craig Ervine stood man alone and brought up his 17th ODI half-century, but no-one else in the Zimbabwe line-up scored more than 16. Left-armer Josh Little and offspinner Andy McBrine took three wickets each to leave Zimbabwe with a total that may be well under-par despite bowler friendly conditions.

Under cloudy skies and amid morning showers, the toss was delayed by two hours and 15 minutes, and play reduced to 42 overs a side. Another interruption during the Zimbabwe innings saw that cut further to 38 overs each.

Brendan Taylor, who walked out to a guard of honour from his team-mates, scored just seven in his last international innings. After facing a maiden over from Mark Adair, Taylor was off the mark with a hoick to deep square. His only other runs came off the outside edge when he poked at a short, wide ball from Little. Taylor was bowled off the next delivery, swinging for the hills in classic Taylor style with no footwork. Taylor finished with 6684 runs in his ODI career, the second-highest for Zimbabwe in the format.

In Little’s next over, he removed Regis Chakabva with a full ball on middle and off that beat his indecisive prod. Ervine and Wessley Madhevere put on the most productive partnership of the Zimbabwe innings with 59, and both looked in good control. Ervine was particularly confident on the sweep, and played the shot of the innings when he cleared the front leg to send Shaun Getkate over the deep square leg boundary for six.

Madhevere also tried to take Getkate on, but his attempt to slap him over the infield resulted in a tame catch to Paul Stirling at mid-on. That wicket sparked a collapse that saw Zimbabwe lose 8 for 57 either side of a rain break.

Zimbabwe’s other retiree, Sean Williams, played back to a full ball from McBrine and had his off stump pegged back to depart for four. McBrine also removed a well-set Ervine, who pushed forward defensively and edged to Lorcan Tucker. Three deliveries after Ervine’s dismissal, a light drizzle stopped play for 28 minutes and reduced the match even further. Zimbabwe, it turned out, were never intending to use all their overs.

Sikandar Raza was run-out after responding late to a call for a single from Ryan Burl. By the time Raza saw that Burl, who was the striker, had taken off for a single after hitting Simi Singh to short midwicket, Andy Balbirnie had already swooped on the ball and Raza had to run to the wicketkeeper’s end, although he was never likely to make his ground. Burl was then bowled in Simi’s next over, when he missed a heave across the line.

Ireland’s next two wickets came through reviews: McBrine accounted for Luke Jongwe, confirmed leg before, and Little returned to take out Blessing Muzarabani, who drove away from his body and was caught behind. Richard Ngarava and Wellington Masakadza tried to bat out the overs, but Ngarava was bowled as he tried to pull Simi to end the innings with four overs to spare.