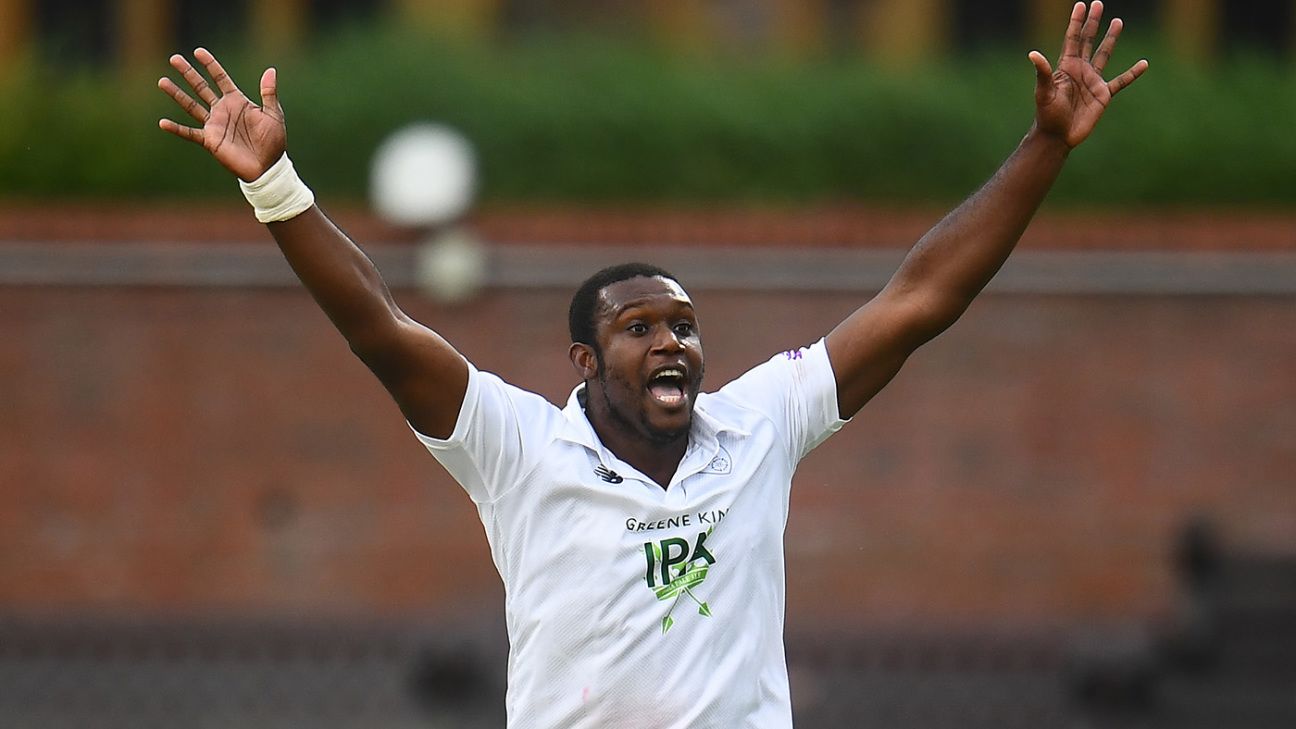 Cricket is a game of bluff. Plans are made and traps are set. Demons in the pitch are invented and ghosts are often spotted. A slip cordon gasps in disbelief as a ball is left harmlessly past the stumps, a batter motions that the ball just nipped off the wicket when they’ve missed a straight one.

Ghosts and demons were everywhere today at Southampton. A pitch that was definitely still difficult to bat on, but not to the tune of the 16 wickets that fell across the day and that had seen Nottinghamshire bowled out for 155 and Hampshire finish 133 for 7 in reply

Notts had started the morning 29 for 1 in reply to Hampshire’s first innings total of 226. Five balls later and they were 29 for 3 as Keith Barker dismissed Ben Duckett from the first ball of the day and Joe Clarke four deliveries later en route to a career best of 7 for 46.

It would be easy to be wholly superlative about Barker’s performance. That he was unplayable, that he made the ball swing around corners and made it seam off the pitch at right-angles. But he didn’t.

His two spells were from a bowler who was stretching Nottinghamshire’s batters to their limits as opposed to taking them beyond them. Wearing them down and asking the same question over and over as opposed to blowing them away.

The ECB have recently been releasing highlights packages that are edited down to every ball in a Jimmy Anderson spell or every scoring shot of a Joe Root century. The same needs to be done here in order to truly appreciate Barker’s performance.

Bar the dismissal of Hameed that occurred late on day one, none of his wickets stood out as particularly exceptional deliveries. Duckett was caught down the legside, Clarke popped one to mid-on, Mullaney and Moores found themselves caught on the crease and so on. The ball was never doing too much and it was never doing too little, but it was always doing just enough. Keith Barker, season to taste.

The first three dismissals of the day would encapsulate what was to come. Duckett’s strangle down the legside could be interpreted as misfortune, Clarke appeared to be the victim of a ball that stopped on him and Mullaney’s ball straightened slightly to trap him LBW. All three returning to the Notts dressing room with the message of, “don’t go out there, it’s haunted”.

But it wasn’t that bad. It wasn’t great, but it was better than many had feared before play. In particular, the ball was swinging far less than anticipated. But cricket is a game played in the mind as much as in the middle, and Notts had manifested a fiction and turned it into the truth to end up all-out for 155.

The only two Nottinghamshire batters who were able to see the woods from the trees were Ben Slater and Liam Patterson-White. Both of whom passed 50 with authority when all else bar Brett Hutton (16) failed to reach double figures. Slater was eventually dismissed by Barker as he edged to slip whilst looking to leave, whilst Patterson-White was the eighth wicket to fall of the innings and the first to not to be at the hands of Barker as he was bowled by Brad Wheal.
Starting their second innings with a lead of 71, Hampshire’s response started with relative serenity before Dane Paterson came onto bowl and shouted “boo”. His first ball was cut to slip by Ian Holland. And his third, an awful delivery that was swinging a mile down the leg-side, was somehow prodded to midwicket by Tom Alsop. The following over Luke Fletcher had Joe Weatherley caught behind, before Paterson returned to take his third wicket in nine-balls with an excellent inswinging delivery to trap Gubbins LBW. A combination of good bowling and bad batting had seen 26 for 0 become 28 for 4. Scary stuff.
But James Vince isn’t scared of ghosts. He’s not big into demons either and no doubt had a passion for Scooby Doo when growing up. Over the years, his elegant technique has often been misconstrued for an apparent lack of passion or care. But here, with his side in freefall and a County Championship on the line, his fluent half-century pulled the mask back to reveal the wicket for what it really was. That there had never been any demons and it had just been those pesky kids who didn’t know how to bat all along.

So with just six overs remaining in the day and serenity seemingly back in store, Hampshire looked set to close out the day as favourites. That is, until Luke Fletcher bowled Vince with a delivery that jagged viciously back through the gate. And then Patterson-White found some turn to dismiss Felix Organ shortly after. Serenity had been abandoned, the demons were back and day two finished with the match in the balance. Anyone else scared?

Cameron Ponsonby is a freelance cricket writer in London. @cameronponsonby