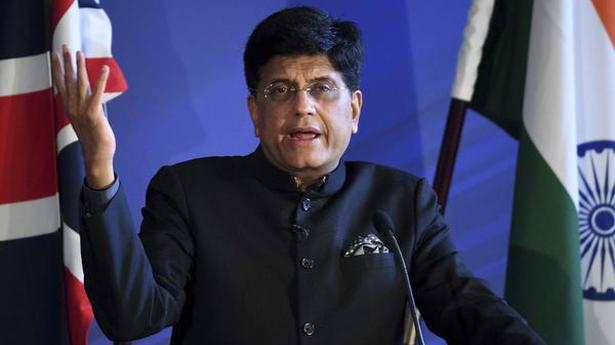 Formal negotiations for the proposed India-United Kingdom Free Trade Agreement (FTA) will begin on November 1, with an interim ‘early harvest’ agreement to be completed by March 2022, the government said on Tuesday.

The U.K. government, in a separate statement, said the two ministers agreed on the steps to get ready to launch negotiations ‘later this year’, including a series of trade working groups from September to help both sides ‘better understand each other’s position on potential chapter areas in any trade deal including tariffs, standards, IP and data regulation’.

“The International Trade Secretary reaffirmed her ambition to negotiate a trade agreement that delivers results for the British people and businesses including those in digital and data, tech and food and drink,” the U.K. statement said, indicating its priority areas.

The proposed FTA would unlock ‘extra-ordinary’ business opportunities and generate jobs, Mr. Goyal said, emphasising the need to strike a balance between commitments and concessions in goods and services. Discussions to finalise the terms of reference for the FTA negotiations will begin on October 1, he added.

The U.K. India Business Council, in its pre-FTA submission to the U.K. Department of International Trade, had sought measures to ensure tax parity between U.K. and Indian businesses and lower tariffs on alcoholic spirits and medical devices, among other items.

It had also pitched for curbing non-tariff barriers to goods trade by aligning standards and ‘simplifying burdensome and costly customs procedures’ and steps such as ‘IP protection and alignment of data protection rules to enable digitally-driven future-focussed’ industries.

The industry is also backing mutual recognition of qualifications in higher education and professional services, which the Indian minister alluded to in his talks with Ms. Truss.

“Certain services of mutual interest may be included in the interim agreement through a request-offer approach wherein we may include priority sectors which are immediately deliverable. If necessary, we may also explore signing of few Mutual Recognition Agreements in selective services like nursing and architecture services,” Mr. Goyal said.