How to get the best out of AskCricinfo 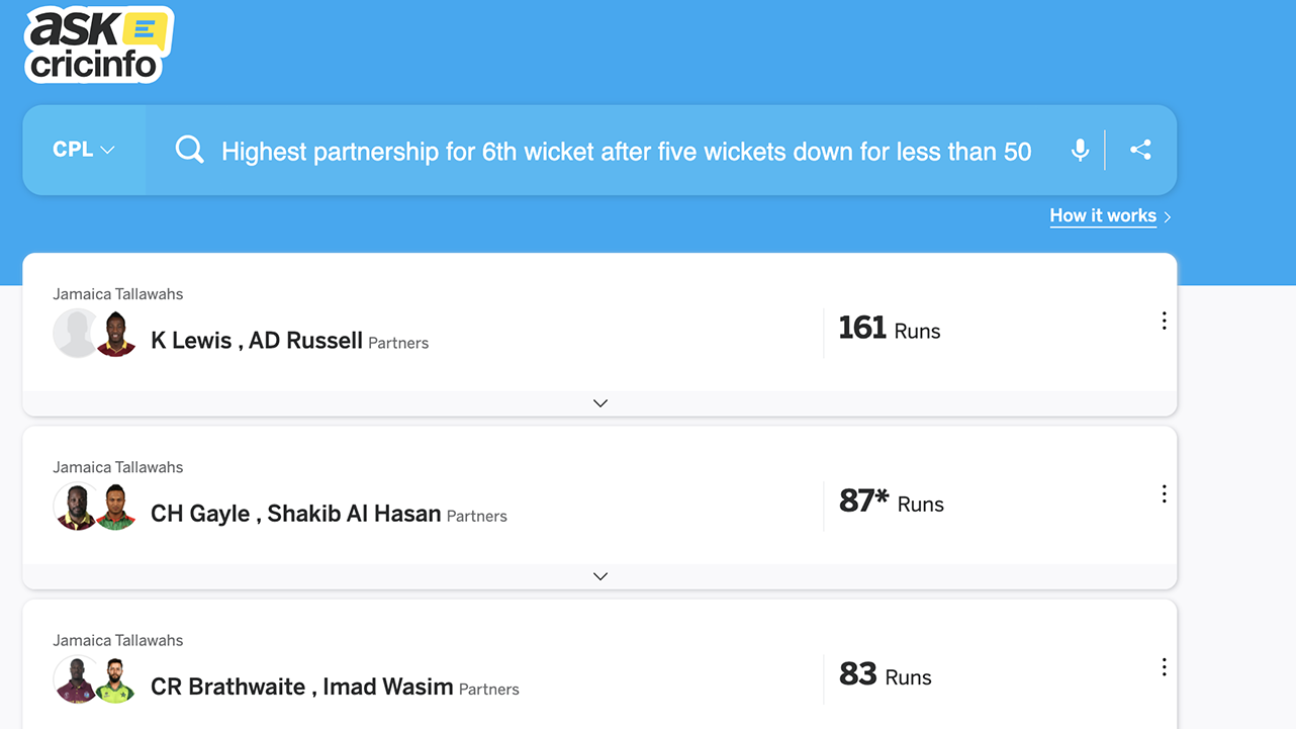 What is AskCricinfo?
AskCricinfo is the easiest way to get your stats questions answered. It’s like the stats nerd in your circle of friends who revels in cricket numbers and has an answer to every query. And unlike that stats nerd, it never sleeps.

At the moment AskCricinfo is still a work in progress. Which means it will make mistakes, and it won’t know the answer to every question you ask. But we’re banking on you – the cricket fan – to help us improve it and make it the perfect product.

What sort of queries will it answer?
To start with, T20s will be the focus of AskCricinfo. More specifically, it will answer questions on:

However, since we don’t have ball-by-ball data for many women’s T20I matches, AskCricinfo will only answer those queries for which data is available from scorecards, for this category. Thus, you won’t get answers to player vs player, powerplay, death-over questions, but questions related to match totals, run-rates, partnerships etc will be answered.

For the men’s matches, the results for ball-by-ball queries will include all the matches for which these details were recorded.

A few examples of the query types it will answer are:

Scroll down the page for a bigger list of sample questions.

If a written query mentions a different tournament compared to the dropdown, the dropdown entry will change to accommodate what is mentioned in the text. A couple of examples will make this clearer:

Query: What is the most sixes hit in an innings by a team (select ‘BBL’ from the dropdown)
The output leads with 15 sixes, by Sydney Thunder versus Sydney Sixers in Adelaide
Change the dropdown selection to ‘IPL’.
The output now leads with RCB’s 21 sixes against Pune Warriors in 2013
Now change the query to ‘Highest partnership in a defeat in a T20I‘, but keep ‘IPL’ in the dropdown.
As mentioned earlier, the query engine gives precedence to the written query over the dropdown selection, and throws up the 156-run partnership between Adnan Idrees and Ravija Sandaruwan as the top entry, with the dropdown automatically changing to T20Is. You can also view the scorecard of that game by clicking on the drilldown options on the right on that row.

Do we need to ask the questions in a particular format?
No, but the clearer the question, the higher are the chances of AskCricinfo fetching the right answers. Here are a few tips:

Keep the questions specific, using key terms that will help the engine identify the question and answer it correctly. These keywords include the following:

batter/batting, bowler/ bowling, team, in an innings, in a match, in a season, overall. For example:

– Use “versus” or “vs” or ‘v” for batter-versus-bowler match-up questions, and “and” to compare two players. So, “Gayle versus Ashwin in the powerplay in IPL”; “Compare the strike rates of Pollard and Russell in the death overs in IPL”.

Mind your spellings : The engine may not identify players who have been spelt incorrectly, so be careful about spelling names right. In general, avoid spelling errors and typos to get the best results from AskCricinfo.

Rephrase your question and try again if you don’t get the answer you expect at the first attempt. The learning engine may not have come across that specific semantic construct for the question. Rephrasing the question might help the engine understand, and answer, your question.

Pick the tournament from the dropdown: As mentioned earlier, the tournament/format dropdown ensures you don’t need to write them out for every query.

What type of questions will AskCricinfo not answer?
While AskCricinfo will answer a wide range of questions, there are some query types that it is not trained for. Questions that fall in the area of the subjects below are beyond it at the moment:

Line, length, ball type, ball speed
“Who bowled the most yorkers in IPL 2020br>
“How many times was AB de Villiers dismissed by the googly in last two seasons?”
“Bumrah’s economy rate when he bowls back of a length”
“Who bowled the fastest ball of last season?”

Wagon wheel
“How many runs has Babar Azam scored in the V this PSL season?”

Shot type
“What is Prithvi Shaw’s favourite shot this season?”

Control factor
“Which batter had the highest control percentage this season?”

DRS
“Which team had the best success percent with reviews?”

This is not a comprehensive list of queries that can’t be answered. Also, some of the above parameters will be added to AskCricinfo’s repertoire over a period of time.

And since this is a purely stats-based engine, it will not answer queries that are not related to stats. (So don’t expect it to know the name of Virat Kohli’s daughter.)

How many rows of data will be displayed on the output page?
For questions where the output is a list (like “most runs scored in the IPL”), the page will show the top five entries by default, which will expand to the top 15 when you click “show more results”. Entries beyond the top 15 will not be available for any query.

Also, for all questions where the output is at a match level (most runs/wickets/sixes in a match etc), you can access the scorecard of the game by clicking on the vertical ellipsis (the three dots) on each row.

How quickly will records be updated during a live game?
While most record pages will get updated almost instantaneously, there will be some lag for the ones pertaining to fastest hundreds and fifties, and hat-tricks.

How can we help improve AskCricinfo?
Right below the filters-applied section is a feedback module, which lets you say whether you were satisfied with the output or not. Please enter your response for every question you ask.

If you felt the answer was incorrect, click the thumbs-down option and enter your feedback. Your responses will help the engine get smarter and learn from its mistakes.

More examples of the type of questions that AskCricinfo will answer: