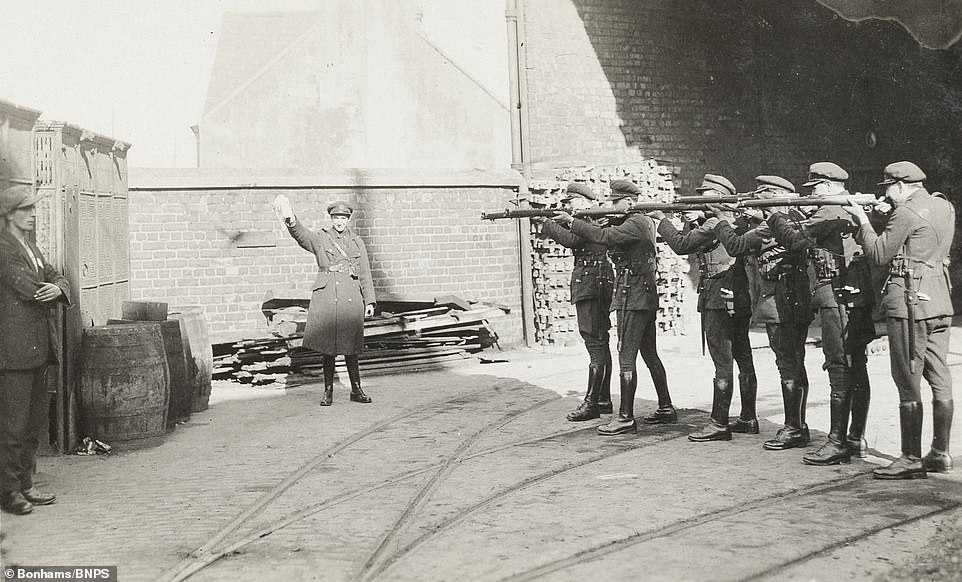 Previously-unseen photographs from a soldier in the then newly-formed Irish Army in the 1920s are set to go up for auction.

The photos show Irish government forces during the civil war of 1922-1923 that followed the Irish War of Independence.

The collection includes a chilling photo showing the execution of an unknown man believed to be an IRA fighter in Cork in 1922 by Irish government forces.

During the Irish Civil War the government forces of the Irish Free State and the IRA both used executions in a bitter and bloody struggle for power following the Irish War of Independence.

The collection of 200 images belonged to Private Dermot Foley of the Irish Defence Force.

Previously-unseen photographs from a soldier documenting the Irish hostilities of the 1920s have come to light a century later in a fascinating album which includes a chilling image of a man – thought to be an IRA prisoner – standing in front of an Irish Free State firing squad (above). The caption on the execution image simply states: ‘Firing squad – execution of a prisoner, Cork 1922’ 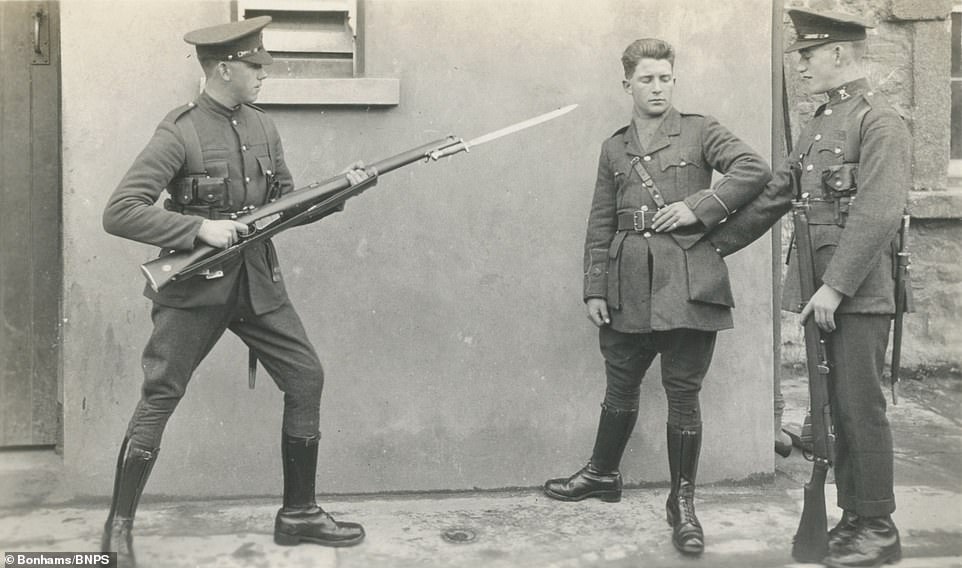 The collection of 200 images belonged to Private Dermot Foley of the Irish Defence Force. They also show a man with a bayonet pointed at him (above) and street parades 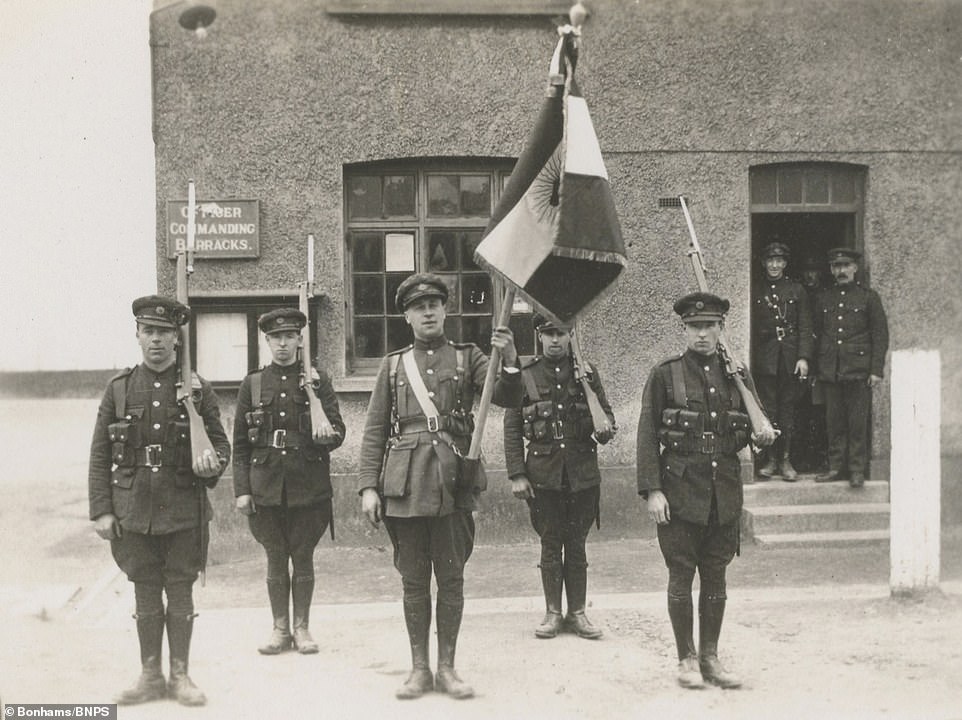 This image of soldiers standing while others watch from a doorway is one of 200 images, mostly taken in 1921 and 1922

The Irish War of Independence was a guerrilla war fought in Ireland from 1919 to 1921 between the IRA and the British forces.

A ceasefire was agreed in July 1921 and an Anglo-Irish treaty signed that December, leading to the creation of the Irish Free State government.

This ended British rule in most of Ireland but disagreement among Republicans over the treaty triggered the Irish Civil War of 1922 to 1923.

The conflict was waged between the pro-treaty Provisional Government and the IRA, who were opposed to the agreement because they believed it to be a betrayal of the Republic which was declared during the 1916 Easter Rising.

The civil war came to an end in May 1923, with Free State forces declaring victory. Their cause had been boosted by the provision of large numbers of weapons from the British Government. 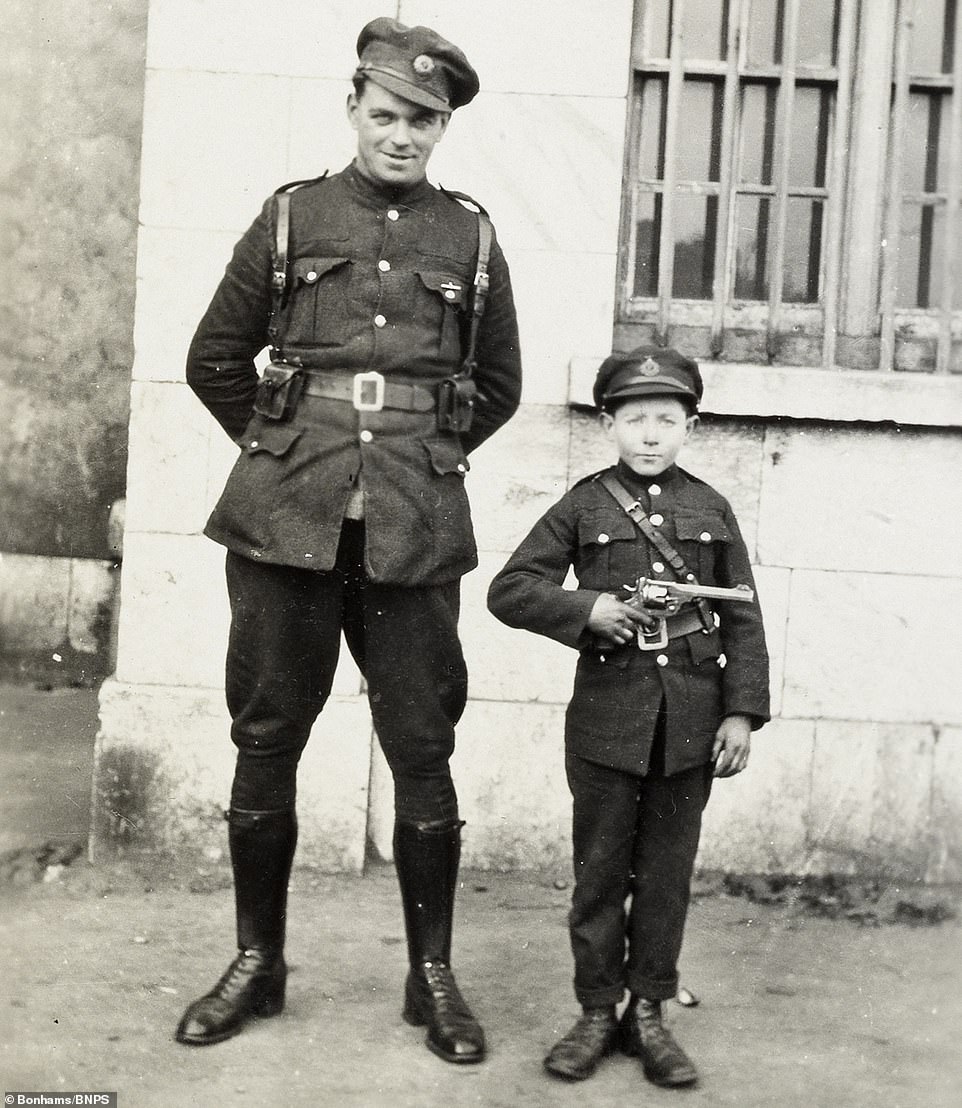 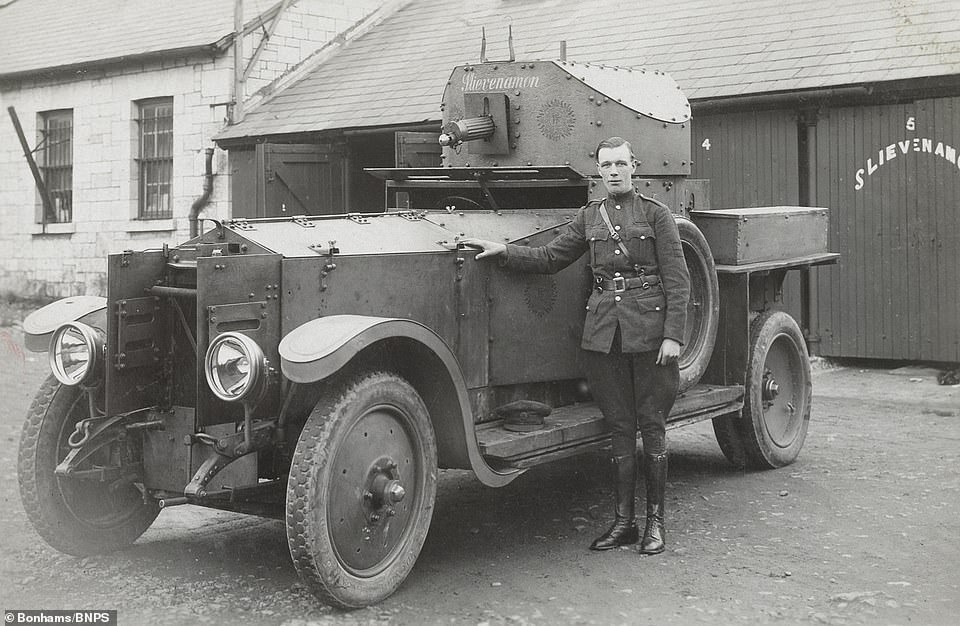 A soldier stands besides a Slievenamon armoured car in a picture stamped April 18, 1924, by T.J. O’Brien of Cork 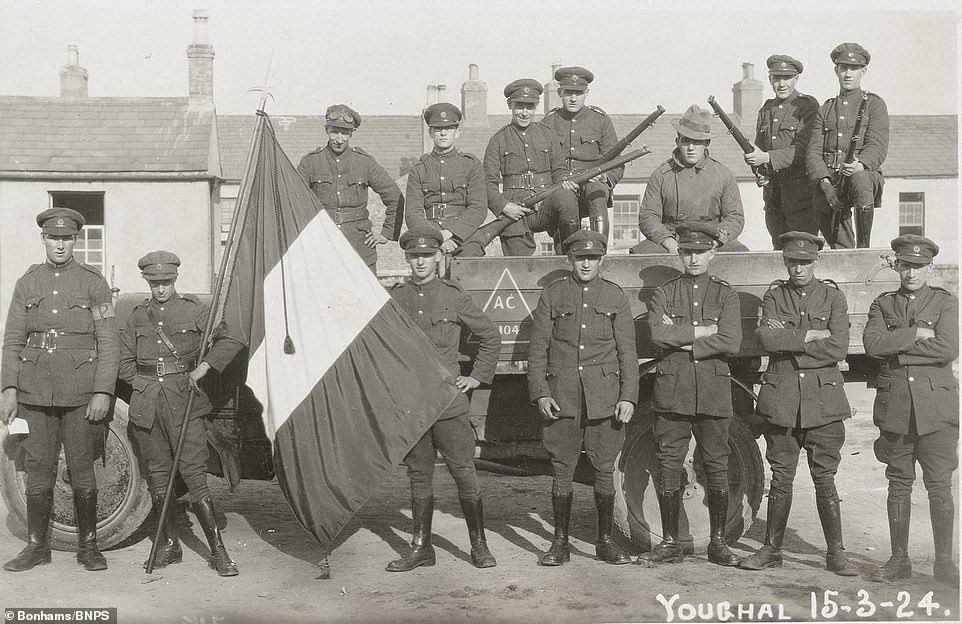 Soldiers pose for a photograph at Youghal barracks, located in the east of County Cork, with this picture dated March 15, 1924

The conflict is believed to have killed between 800 and 900 members of the pro-treaty Irish National Army and at least 400 IRA fighters. A further 12,000 members of the IRA were taken prisoner.

Private Foley joined up aged 17 to fight the British and his records say he was ‘honest, sober, industrious and of very good character’. After leaving the army in 1927, he emigrated to the US on White Star Line’s RMS Baltic.

He settled in Chicago working for the Bell Telephone Company, and his archive also contains postcards of Irish revolutionary soldier and politician Michael Collins, a leading figure in the Irish independence struggle.

After passing down several generations of his family, it is now being sold by auctioneers Bonhams with a guide price of £800 to £1,200 at auction in London’s Knightsbridge tomorrow.

Other pictures include the alarming sight of a boy in uniform holding a gun next to an adult combatant, a soldier standing beside a Slievenamon armoured car and soldiers at Youghal barracks in County Cork.

Matthew Haley, books specialist at Bonhams, said: ‘We believe many of the photos are previously unseen and they document a fascinating period of history.

‘Private Foley fought against the British and he had photographic postcards of Michael Collins who he must of idolised, as well as other figures fighting for freedom.’ 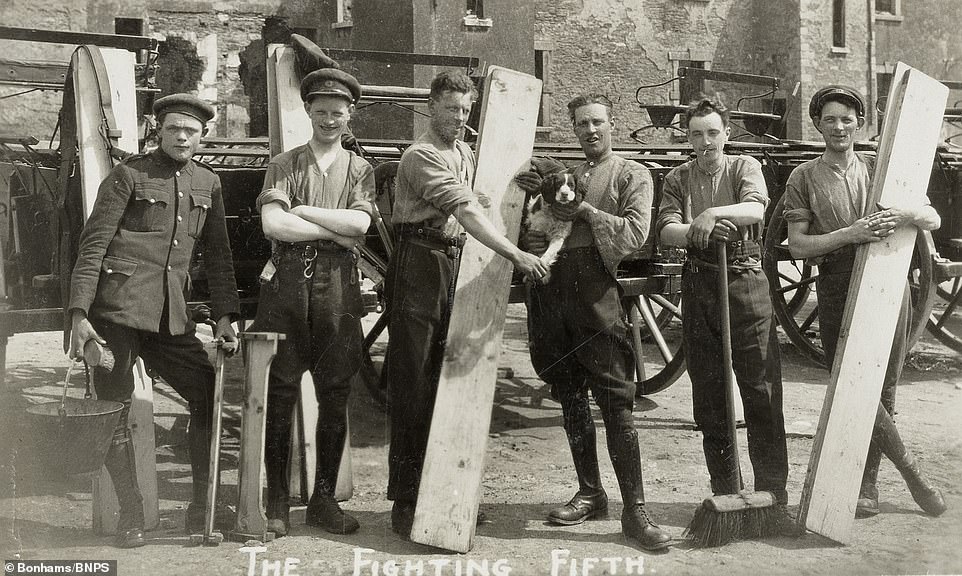 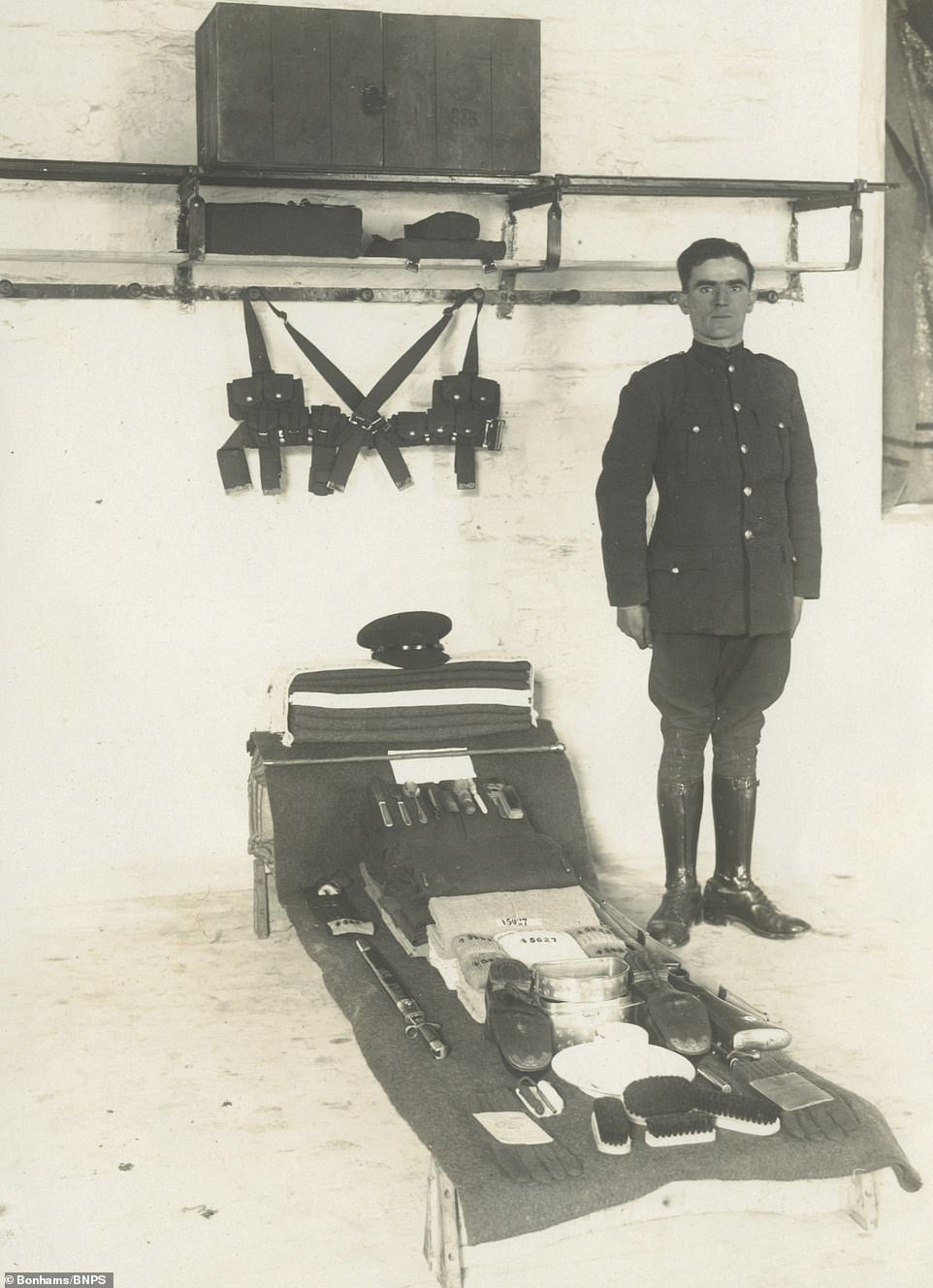 It also said it was a ‘good album of private photographs and real photo postcards relating to the service of Private Dermot Foley, who joined the Army Signal Corps of the Irish Defence Force aged 17, in January 1923.’

Bonhams said that about 25 images are ‘commercial pictorial postcards’, with several of these relating to Michael Collins, with the majority of these scenes at the Catholic Emancipation Centenary celebrations. 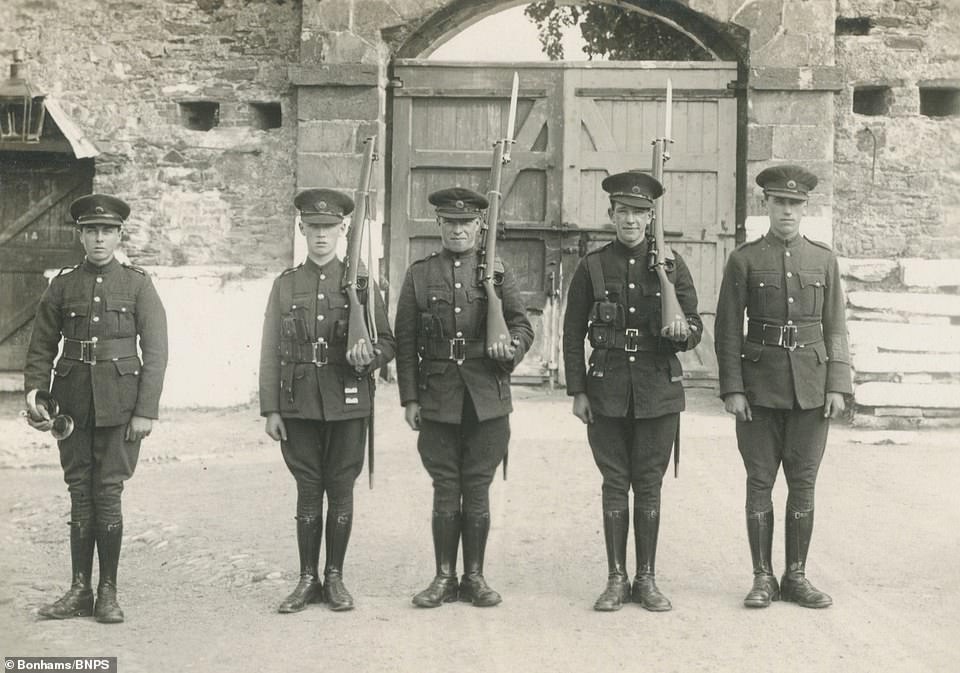 Five soldiers pose proudly in their uniforms for a photo, with three of the men holding their rifles on their shoulders 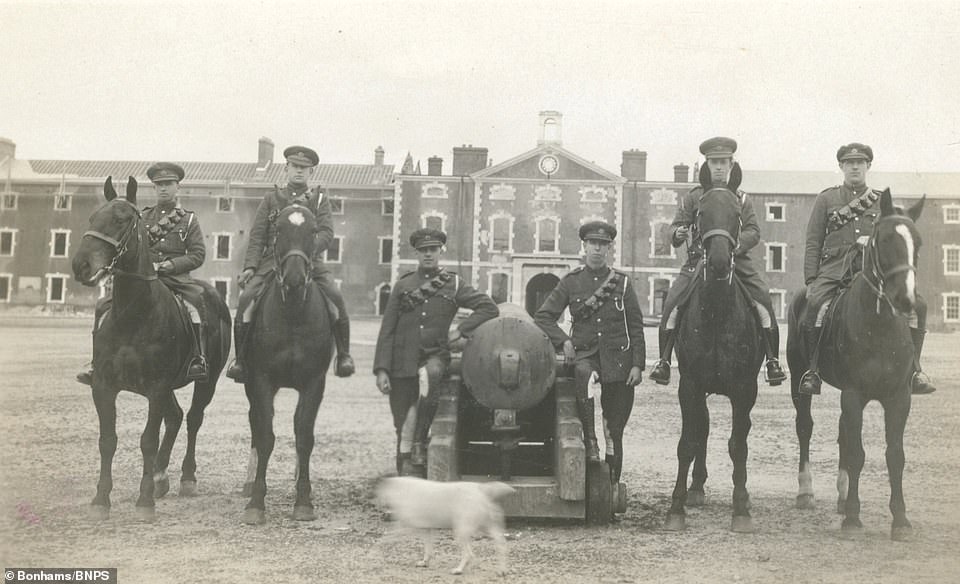 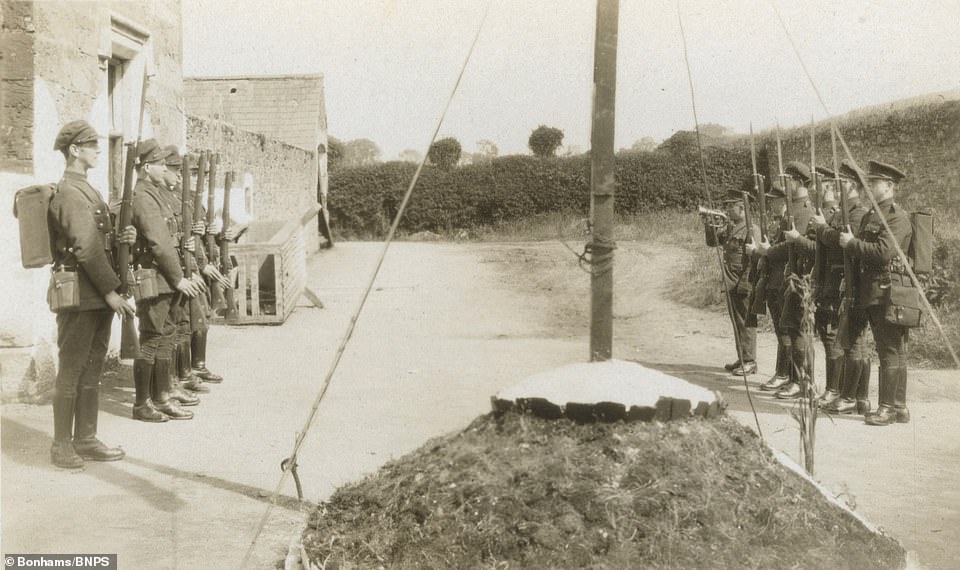 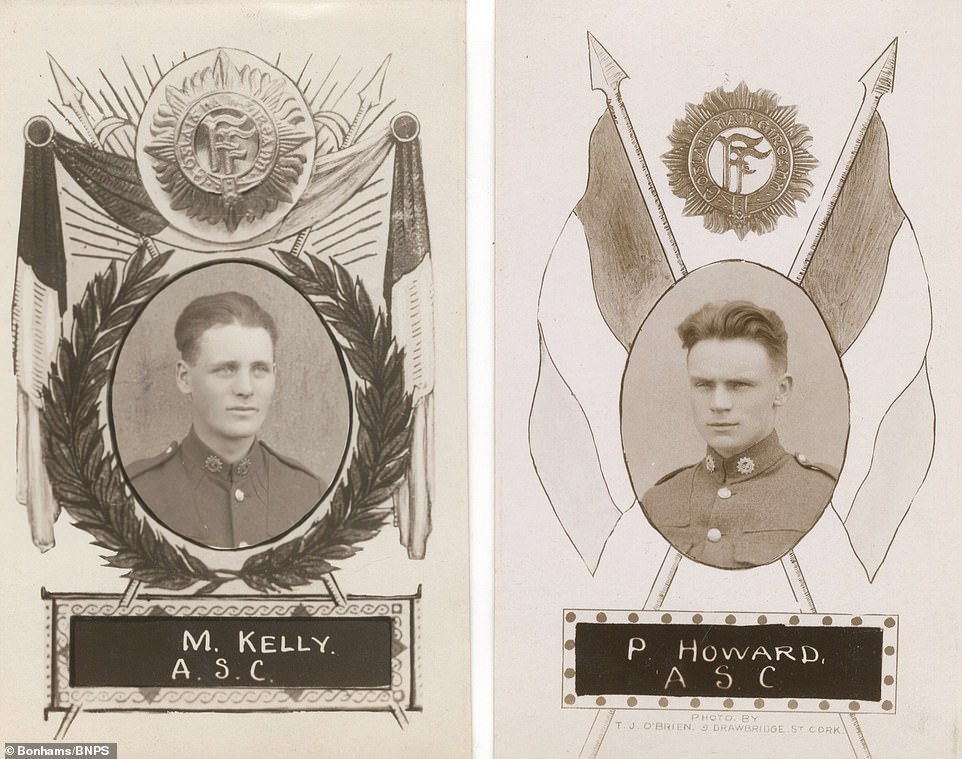 Portraits of soldiers named M Kelly and P Howard, along with the acronym ASC, which stands for Army Service Corps

Amongst the printed and manuscript material is Private Foley’s certificate of discharge from Collins Barracks on 15 March 1927, noting that his character was ‘very good’.

Two typed letters signed by the chaplain and Major Adjutant of the Southern Command recommend Private Foley as ‘honest, sober, and industrious’ and ‘never in almshouse or prison’ to the American Consul in Dublin.

The set also features ten images of RMS Baltic showing the boat, groups of passengers on deck and a last view of ‘Co. Dublin, 17th March 1927’, as seen from the deck. There are also 26 images of his life in Chicago.