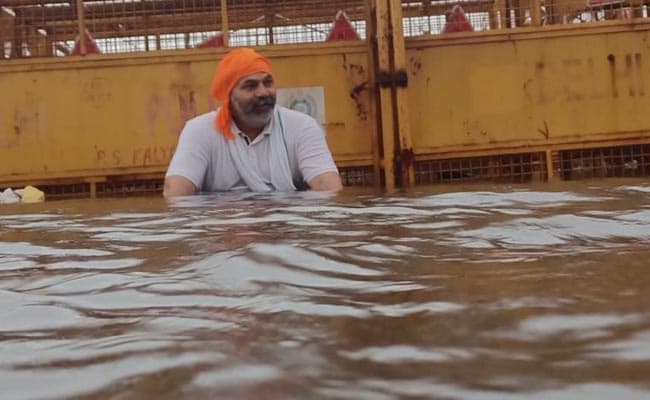 Farmers’ protest: The BKU has been camping at the flyway stretch at Ghazipur.

Bharatiya Kisan Union (BKU) leader Rakesh Tikait along with supporters staged a sit-in on the waterlogged flyway stretch at Ghazipur on Delhi-Uttar Pradesh border where heavy rains also damaged tents and other structures set up by farmer unions that have been agitating against the three agri laws since November.

On Saturday, as heavy rains pounded Delhi-NCR, the flyway stretch at Ghazipur, which has been blocked due to the presence of protesters, was also flooded.

“BKU spokesperson Rakesh Tikait continued the protest while sitting on the waterlogged road stretch. We have been demanding that the drains going towards Delhi from here be cleaned but the authorities concerned never paid heed to it,” BKU media in-charge Dharmendra Malik said.

The waterlogging and the heavy rains caused damage to many tents, langars and temporary structures set up by the protestors at the border area on Saturday, he said.

“Now the protesting farmers have seen all three seasons (winter, summer and rains). The farmers are not going to get scared by anything now,” said Mr Malik.

Hundreds of farmers led by the Samyukta Kisan Morcha are encamped at Delhi’s borders since November 2020 with a demand that the Farmers’ Produce Trade and Commerce (Promotion and Facilitation) Act, 2020, Farmers’ (Empowerment and Protection) Agreement on Price Assurance and Farm Services Act, 2020 and the Essential Commodities (Amendment) Act, 2020 be rolled back and a new law made to guarantee minimum support price (MSP) for crops.

The BKU has been camping at the flyway stretch at Ghazipur.

However, the government, which has held 11 rounds of formal dialogue with the protesters, has maintained that the laws are pro-farmer and has offered to amend them.

(Except for the headline, this story has not been edited by NDTV staff and is published from a syndicated feed.)