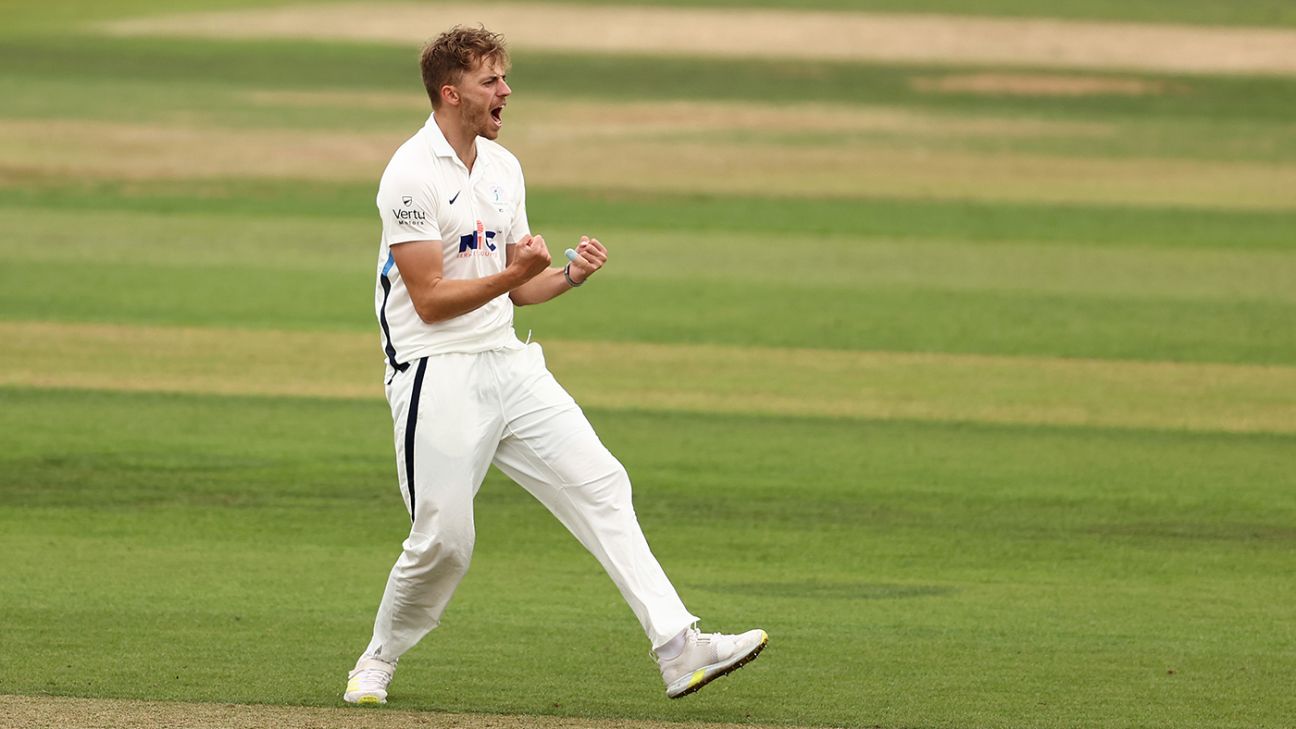 If Yorkshire intended to invigorate their Championship challenge by pitting themselves against Warwickshire on an old-fashioned Headingley seamer, they will be none too confident that things will turn out in their favour after a frantic first day in which 18 wickets fell. Warwickshire had the better of things, holding a 60-run lead with only two Yorkshire wickets intact.

Nottinghamshire’s 10.5-point cushion over the chasing pack with two matches remaining meant that victory was essential for both sides, but batting bonus points could hardly be cast to the wind in such a manner, and the odds are that neither side will manage a single one.

Warwickshire are a tough nut to crack on unresponsive surfaces, adept at taking a game long and wearing down their opponents, but the return of Chris Woakes from the cancelled England Test gave them extra bowling firepower and he joined Liam Norwell in taking three wickets before losing his way slightly late in the day.

“I’m supposed to be playing a Test match, but it’s a shame,” Woakes said. “What happened, happened. It would have been a great end to the series. I haven’t played a county four-day match for quite a while, but with the season coming to a conclusion and things still up for grabs, it’s great to be here.”

England match-ups are a rarity in a debilitated Championship, so the presence of Woakes and Dawid Malan felt particularly significant, especially as not many of England’s Test squad had been included across the country. On this occasion, the odds were heavily stacked in Woakes’ favour, but Malan would be disappointed that his was one of the few giveaway wickets to fall as he cut high to backward point when on 9.

Only two batters made more than 16 in the chaos. Michael Burgess‘ vigorous 66 from 90 balls was a fine counterattacking innings from No. 6 and crucially enabled Warwickshire to add 52 for the last three wickets. Gary Ballance played Yorkshire’s lone hand, his unbeaten 51 from 96 balls the only measured innings of the day.

After winning the toss, Yorkshire took advantage of seam movement more than swing. Fears of Dom Sibley’s obduracy proved ungrounded when Matt Fisher seamed one back to have him lbw. Ben Coad then removed Will Rhodes and Sam Hain in successive balls with deliveries that left them, Hain squared up and chipping into the off side, high up the blade.

Yorkshire’s skipper, Steve Patterson, 37 now, carries a lean and hungry look on pitches like these. Big break-backs bowled Chris Benjamin, offering no shot, and Matt Lamb and then had Woakes lbw stuck on the crease. It was a demanding first-class debut for 17-year-old Jacob Bethel and he soon became Patterson’s fourth victim, and the 450th of his career.

Burgess, though, played defiantly – and with increasing licence, no more so than when he ramped Coad over fine leg for six. It was a shot of similar ambition that saw him caught at deep square leg off the same bowler two balls later.

Yorkshire found life just as tough as Woakes and Norwell took advantage of conditions. Before the fall of Malan, Yorkshire had lost both openers. George Hill was late on a ball that came back to have him lbw and Adam Lyth, whose form has been so poor that he must have retained faith largely on loyalty, was then struck plumb in front by Norwell.

As the floodlights came on after tea, Yorkshire’s plight worsened. Dom Bess and Jordan Thompson both failed to return the fight – Bess bowled through a huge gate, Thompson suckered on the pull. Ballance met Woakes with more confidence than anybody. Without his half-century, Yorkshire would have been in a parlous state.