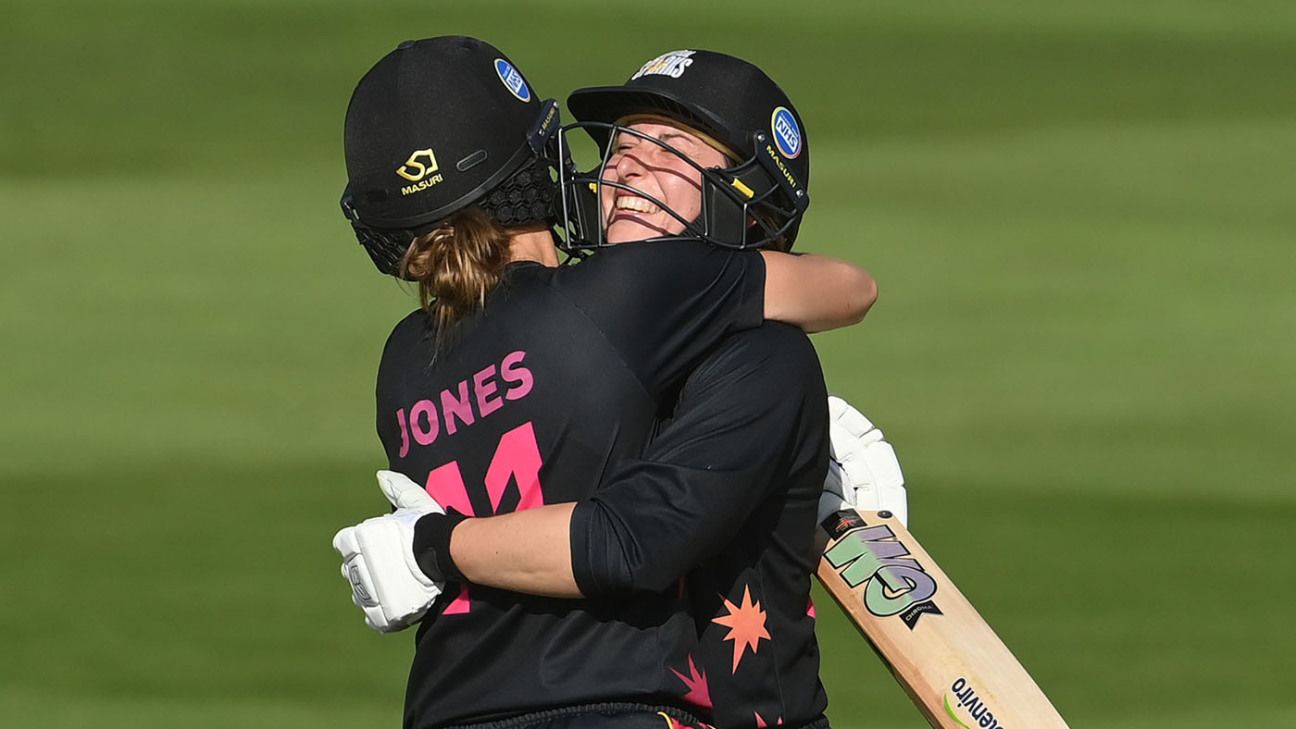 Central Sparks are through to the knockout stages of the Rachael Heyhoe Flint Trophy after defeating South East Stars by 115 runs at New Road. Sparks sealed a fifth win in six games to guarantee a top three spot with a game to spare.

On a used pitch, useful contributions from four of the top five batters enabled Sparks to post a competitive 230 target. Then spinner Georgia Davis, making effective use of the new ball, was the star of the Sparks attack as they bowled out the Charlotte Edwards Cup winners for 114 in just 31.3 overs.

The last seven wickets fell for just 27 runs as Davis finished with 4 for 26 from her 10 overs and then fellow spinner Ria Fackrell chipped in with three wickets.

Sparks elected to bat and were given an excellent start by openers, captain Eve Jones and Marie Kelly. They scored 67 runs during the initial 10-over Powerplay with Jones striking Alice Davidson-Richards for a huge six backward of square.

Jones made 39 off 38 balls before she chased a widish delivery from Ryana Macdonald-Gay and was caught behind with 71 on the board. Kelly tried to hit Phoebe Franklin over the top but was taken at mid-on and in the next over Gwenan Davis went lbw to Macdonald-Gay for 0.

Sparks needed to regroup and Davina Perrin and Thea Brookes batted sensibly to add 55 for the fourth wicket in 10.1 overs. But, after reaching 155 for 3, the innings went into sharp decline with five wickets tumbling for 23 runs in just 5.5 overs.

Perrin, having made an accomplished 43, slapped a delivery from Dani Gregory to extra cover and Bryony Smith struck twice in the same over. Brookes, on 33, went lbw after attempting to sweep and Fackrell pushed forward and was caught behind.

The wickets continued to tumble with Sparks keeper Chloe Hill, on 1, being run out and Kalea Moore bowling Izzy Wong. But useful late order runs from Emily Arlott, who hit 20 not out, Clare Boycott and Davis lifted the final total to a competitive 229 in 49.1 overs.

Macdonald-Gay, a late replacement for Grace Gibbs, finished with excellent figures of 9-1-31-2 with Davidson-Richards and Smith picking up two wickets apiece.

But Davis immediately put the Stars on the back foot with the new ball in dismissing openers Smith and Davidson-Richards inside the initial Powerplay. Wong bowled a probing initial eight-over spell and also rewarded when Kirstie White holed out to mid-on and then sub Grace Potts direct hit from mid-on ran out Aylish Cranstone.

Fackrell made two breakthroughs in her first over to dismiss top-scorer Alice Capsey, who made 26, and Emma Jones and there was more joy in her next over as Kira Chathli lobbed up a catch to slip attempting a sweep.

Davis came back into the attack to have Franklin caught behind and Mcdonald-Gay lbw and it was all over when Moore hit Eve Jones to mid on.