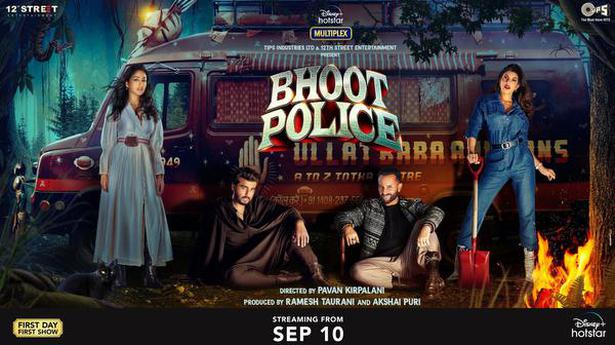 Taking forward the Stree kind of storytelling, Bhoot Police comes across as a stress buster during the pandemic

In times when the OTT platforms are serving a lot of trash in the name of being realistic and visceral, here comes a horror-comedy that literally tells us to push logic into a corner and take a ride that is mostly amusing, mildly frightening.

Mounted like a modern-day fable, the tale of two ghost hunters, addresses the family audience, a rarity these days. Taking forward the Stree kind of storytelling, it comes across as a stress buster during the pandemic.

Usually such fare expects the audience to believe in the mumbo jumbo but director Pawan Kripalani, who has established himself as a kind of spook specialist, teams up with writers Devashish Makhija and Sumit Bakheja to create a universe where one of the two lead protagonists prides in selling superstition to the believers. It provides an opportunity to consistently mock at the genre even as they tell the story of a spirit on the prowl.

Ghost hunters Vibhuti (Saif Ali Khan) and Chiraunji (Arjun Kapoor) have been roped in by Maya (Yami Gautam), a tea estate owner, to complete the unfinished business of their father. Vibhuti sees it as yet another opportunity to fleece an innocent client, while his younger brother feels it is time they showcase the skill they have inherited from their father. Their names are traditional but their vocabulary is very up to date. Meanwhile, Maya’s sister (Jacqueline Fernandez) has her own plans and motives to tackle the situation.

It spirals into a series of satirical and subversive situations, making social and political comments between the lines. Be it the take on girl education or a subtle reference to the National Register of Citizens, or for that matter, a jibe at nepotism, the writers keep it witty for the most part and use the horror trope to remind us of the social fears that we face.

Be it the fair of occultists or the ghost’s movement in the woods, Mr. Kripalani’s strands of comedy and horror feed each other. The imaginative use of song Kyun Ho Gaya Na number “Aao Naa” by a villager to help her husband in taking a dump on a dreadful night is one of the highlights.

The casting is spot on. Saif Ali Khan is in the Go Goa Gone mode and effortlessly doles out one punch after the other. It is his pitch-perfect performance that makes the writing livelier. Arjun Kapoor fits the part of the brooding brother looking to find his mojo. So does Jacqueline as the glamorous social media influencer who wants to shift to London. Jaaved Jaaferi and Jamie Lever’s comic timing add to the mirthful atmosphere.

The storyline gets predictable towards the end, but before it drags, Bhoot Police packs their bags, perhaps for a second outing.