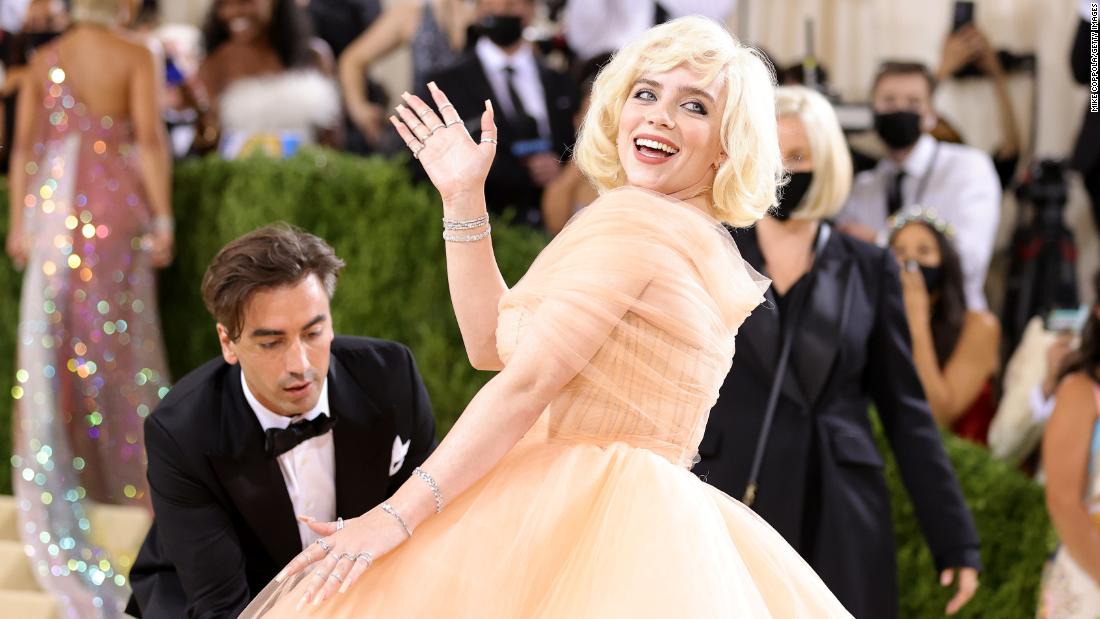 Just one day after the lights dimmed on another edition of New York Fashion Week, and the MTV Video Music Awards took over Brooklyn’s Barclays Center, pop culture’s most famous faces have descended on the The Metropolitan Museum of Art to celebrate the fashion industry’s party of the year: the Met Gala.
Typically held on the first Monday in May (it was postponed in 2020 due to the coronavirus pandemic), the star-studded annual fundraiser for the Metropolitan Museum of Art’s Costume Institute heralds the opening of the museum’s banner fashion exhibition — this year, “In America: A Lexicon of Fashion.” Opening to the public on September 18, it’s the first half of a two-part exhibition exploring how the narratives and aesthetics of American fashion have evolved since the 1940s until now, through about 100 historical and contemporary ensembles.

But tonight, the focus is on the steps of the Met, where A-list actors, supermodels,TV drag queens, musicians and athletes are walking the cream carpet in their finest designer attire.

This year’s co-chairs reflect the not only the diversity of the invite list, but its collective star power: Timothée Chalamet, Naomi Osaka, Billie Eilish and inaugural poet Amanda Gorman are presiding over the function, alongside honorary chairs Anna Wintour, Tom Ford, and Instagram head Adam Mosseri.
Ahead of the event, Wintour told CNN Style via email that American fashion in 2021 has become “a patchwork, reflecting the world we’re all living in, as seen through many different lenses.”

Adding to that patchwork, the Vogue editor-in-chief eschewed her usual Chanel and wore a floral Oscar de la Renta gown — a tribute to the late designer, who was a close friend and avid gardener.

Gorman, meanwhile, told CNN Style American fashion was “diverse, vibrant, beautiful, and intersectional.” Making her way up the steps she said, “I think American fashion really is at the crossroads of the world.”

The poet wore an embellished indigo gown by Vera Wang, with a jeweled laurel crown and a book-shaped clutch emblazoned with the words “Give me your tired” — all references to the Statue of Liberty.

With typical nonchalance, Timothée Chalamet made his entrance in a shrunken white satin suit jacket and billowing white trousers by Haider Ackerman—tucked into a pair of white Converse sneakers. Underneath, he wore a layer of Rick Owens.

New York congresswoman Carolyn B. Maloney didn’t mince her words in a bold look emblazoned with “equal rights for women” written down the lengths of trailing shoulder panels.

Rapper Saweetie wore a figure-hugging, crystal-embellished dress with a lengthy train by Christian Cowan. The design incorporated the colors of the Black American Heritage flag and a Filipino flag — a reference to her mixed heritage. Similarly, Naomi Osaka brought her Japanese and Haitian background together in an ensemble by Louis Vuitton. The ruffled sleeves evoked carnival, while the red obi across her tulip skirt recalled the traditional kimono tie.

Follow this story to see all the highlights from this year’s Met Gala red carpet as they happen.